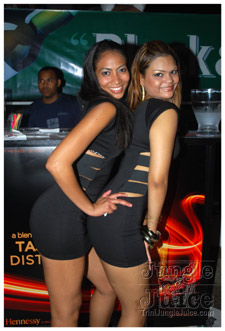 As this is my first year back for Carnival and it have about 10 fetes every weekend, I've been depending on people to tell me which ones really worth hitting up. Island People is usually the first all inclusive TJJ hits up for the year and came with testimonies on all the bess tings that does be there. So I handed over my 400TT and headed up MOBS 2 with visions of neverending corn soup and fit fellas.

By around 8pm when we reach and fete was already ramming ... we like that! Models lined the entrance path wearing Ip 2011 costumes and frozen in various positions. I dunno how they manage to stay so still without getting cramps (was seeing some trembling legs) but props for an interesting entrance for the patrons! The costumes look rellll good ... I might have to reconsider band choice next year! 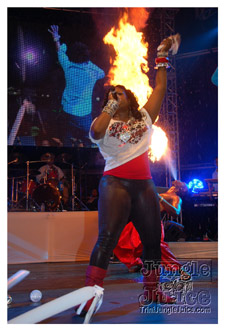 As soon as we got in we were handed cup, rag and drinks. Have to say Ip ... service was great all night! Whether inclusive or paid for, there was never a long wait for food or drink and everything remained well-stocked whole night. No complaints on service at all; and it is not often we could say that! One thing though, we spend about half an hour trying to figure out where the doublesman was (stand was empty) and then where the corn soup was. Things you had to pay for were well in sight but some better signage might make things easier for patrons next year? Unfortunately we had to remain in the poor people section but we heard some level sushi and choice drinks was served up in the hyper inclusive section. Wasn't nice hearing about tiger shrimp when you sipping on some cornsoup that didn’t tantalize the taste buds and getting a doubles tabanca, but what you go do? Hyper for it next year!

Some more props for Ip ... MOBS 2 was looking maaad! Plenty space, everything laid out well, screens to see what going on on stage no matter which section you were in, tables to eat, the bess public bathrooms we ever see at a fete yet ... venue was on point! As for the crowd ... definitely some BESS tings but wham to the fellas??? Like all the fit ones were at one of the other 9 fetes that night? Sweet Juice was strictly informed that Yeah! (Amnesia re-named) was a fete to see and be seen. So we pull out an outfit and some heels that weren't suited for palancing 6hrs on an uneven concrete floor. Unsuitable maybe, but so were some of the cooler fete-ish outfits we saw that night. Buss up short pants and T-shirts?!!? Fellas (and one or two girls), allyuh coulda do better. Once again though, the various models and promo people for the night were looking real bess. Definitely plenty eye candy for gals and guys!! 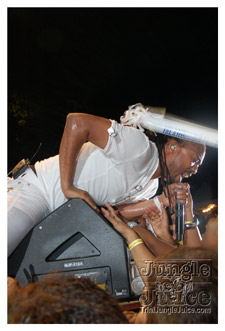 Then the performances start. Saucy Wow, Nadia Baston, Dil-E-Nadan, Shal Marshall, SuperJigga TC, Patrice Roberts, Kes the Band, Swappi and the godfather himself, Machel Montano just to name some. With a line up like this, what we could really say??!! VIBES CYAR DONE!!!!!! It was pumping from start to finish, and we didn't want to go home!! Machel had the best presentation - plenty dancers, plenty confetti, plenty lights ... but some were saying that he wasn't as energetic as usual. As this was my first proper experience, no complaints here! Have to give props to Kes this year. The band come out large and had everybody getting on 'Wotless' while wining on big ting small ting ... wining up on all ting ('Ah Ting')!! Saucy demonstrated the “bicycle and tricycle” wines and had the audience laughing and wining for her whole performance. I think I enjoy this one the most! We really have nothing bad to say about the performances. You hadda be there to experience it. Soca Monarch go be tough this year!!

I was a bit surprised that things actually wrapped up on time. Fireworks were set off to end both Machel's performance and the night at exactly 2am. Level traffic to get out, but once you passed Pier1 it was flowing again. For $400TT, I was kinda hoping for more food but everything else about Yeah was worth it ... especially the performances!!! The Hyper inclusive patrons were still talking about the shrimp as they left. It is a definite 'YEAH!' to Ip next year, but this time we leaving the high heels at home.

A paying patron of the All Inclusive section,
Sweet Juice over and out