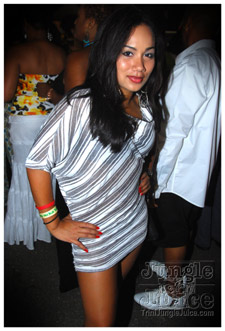 That’s right it was time to switch sports and move from the high of Trinidad & Tobago making it into Caribbean T20 Cricket Finals and time to head to the College next to the 18 Hole Moka Golf Course for some eating, drinking & wining!

The 12th Instalment of the annual Soka In Moka was laid out like any typical All Inclusive Carnival Fete with eats in the back, drinks in the middle and entertainment in the front.  The usual assortment of food and goodies were available from Chinese, Wantons, Din Sum, Corn Soup and Bake & Shark.  But the hit of the night was the Jamaican Patties which helped create the warm feeling of “One Caribbean Togetherness” in my tummy!

Now it’s time to burn off all of this food with some serious wining.  First up was Roy Cape All Stars featuring Blaxx!  But even with a strong horn section and a good voice from Blaxx their overall performance was a confused mess with both Rita Jones and Blaxx wining out of time.  And then things only went down hill from there as Benjai bursts onto the stage dressed as if he was heading to the local parlour to give his best nasal rendition of his mega hit “Trini”!

Dil-E-Nadan was next.  And as lead singer Raymond told TJJ TV backstage before going on, “For Dil-E-Nadan , it’s all about music with a capital M!” And finally there was KES The Band!!! 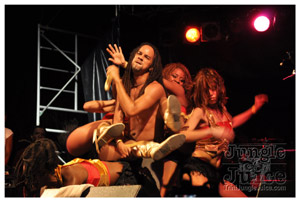 With Machel Montano’s 2010 sabbatical it appears that Kees Dieffenthaller has done his homework and is poised to dethrone Machel as the Prince of Soca!  And with his supa mega hit “Wotless” Kees seems unstoppable! And not to be forgotten was high octave hitting Nadia Batson featuring spice infused Tallpree performing “Lighters”. Overall, Kes the Band performed in perfect synchronism with five backup dancers reminiscent of the Pussy Cat Dolls, and had once again proved that you can be truly entertaining without being vulgar!

And when you thought that the night could not get any better the DJ had announced that Trinidad & Tobago had defeated English Cricket Club Hampshire to win the Caribbean T20 Final in Barbados!!!  Now it’s time to wine!