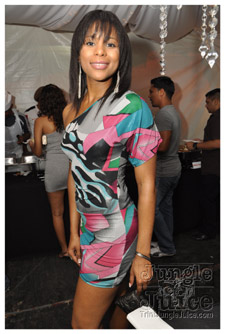 Yes folks, I finally popped my cherry and arrived at the infamous ONE fete! Yuh girl Pink Juice & the rest of the Trini Jungle Juice family was in full effect. If we didn’t catch yuh getting on "WOTLESS" live on TJJ TV, we definitely caught you on camera! ;-)

All I heard prior to the fete was this is one of the BIGGEST fete’s for the season and I MUST go ONE fete @ least once in my life! I even went out the night before and met a guy who flew in JUST for this ONE fete!! Guess what?? He wasn’t the only one either... yuh know yuh fete big when men flying in for the weekend just to attend.

I must give props to Ultimate Events for doing a fantastic job transforming the Queen’s Park Oval and setting the ambiance for the evening. The layout was great for the size of the crowd in the venue. From the elevated platform booth’s, to the bar and food tents, not forgetting the stage ... everything was easily accessible for the patrons. However, one thing I will comment on is the need for a designated media area in front of the stage to capture the crowd’s experience and the performers properly ... a lot of fellow photographer’s weren’t too happy either.

ONTO THE FOOD... I reach the fete about 7ish and I thought I was early ... lol ... little did I know everybody had the same idea - come early and fill yuh belly! To my delight, I was spoilt for choice... yuh want Chinese? They had dat! Yuh want Jamaican? They had dat!  Yuh want Arabic, Indian, Creole, Mexican ... ohhh goshh my mouth watering talking about it... they had datttt... LOL. Even though I heard some people talk about not getting food, I got mine and went back for seconds! :-) Food yuh getting a high FIVE!! Twas bessss. 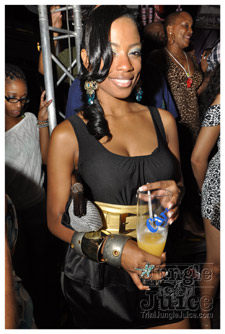 Vibez was niceeee too. First to get the crowd pumpin was KES THE BAND.  Anybody else fine Kees body looking extra SEXY these days??!! Ahhh mean KES darling wateva you doin ... keep it up!!!!  Yuh know I took my front of the stage position to get my gape on... and to get on WOTLESSS... cuz I could really careless... even if Daddy Juice get vex.... tell dem call meh name... I go take de blameee.... LMAO.
Hmmmm, then BOY reach! Well yes, I’ve been waiting for the return of MACHEL MONTANO to carnival... and couldn’t wait to "Bend Over", take "Advantage" of dem fellas and get charge for wining like dat ("Illegal")! ;-) Well, Machel didn’t disappoint! His performance wasn’t as hyped as I hoped it would have been... but I still wine to the ground and I wasn’t alone .... others joined me!! LOL.  BUT I must say I fine the majority of the fete was rather “social” ... WHY? Level drinks... bess food and music was pumpin!

Got a lot of mixed reviews with this fete but I enjoyed myself... oh yesss the season officially start for me. I don’t know about YOU, but I definitely gonna ADVANTAGE IT!!!

-Pink Juice for the TJJ fam