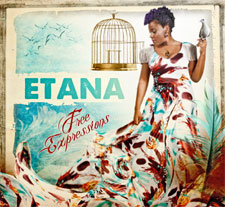 The latest compilation from Reggae soul singer, Etana sees its official release globally. The highly anticipated, Free Expressions is the singer’s sophomore effort which shows maturity in her craft. The prolific song writer penned a dozen of the fifteen tracks on this new album. Etana is especially excited about the project as she wrote without restriction as the title suggests. She poured her raw soul into the powerful lyrics belted on the record.

The songs express her feelings on the joys of love, experiencing heart break, self empowerment and social issues among others. Free Expressions also comprises of a collaborated effort with Italian reggae superstar, Alborosie. On the previous album, The Strong One Alborosie shared singing duties with Etana on the mega hit “Blessings”. This time around he contributed as a producer on the track, “I Got You”, which is a guaranteed hit.

Her most recent chart toppers: “August Town”, “Free” and “Happy Heart” are all included on the new release. The next single is “People Talk”, produced by industry veteran, Clifton “Specialist” Dillon and Rohan Dwyer. The song speaks of Etana’s determination to succeed against all odds in her music career, despite the challenges people throw her way. Ace music video director, Asha Mchail of Fareye Films has already shot the video at 'Victoria House' in Kingston. The brand new video premieres on TV screens later this month.

Etana worked assiduously on this new project which she feels very confident about. It will certainly find its way as a reggae classic and what makes it even more special is, it’s from a young and talented female Soulstress. Etana departs this week for her North American tour which kicks off at the Hard Rock Café in Orlando Florida on Saturday.