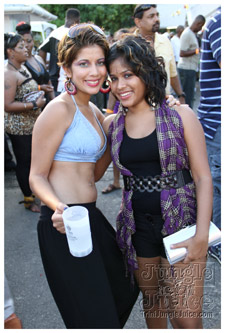 It was time to travel from China to India with UWI’s All Inclusive Fete.  After 21 years of event management you can assume that they must get something right, and they sure did!

It must be said again that they got it right, and it had to take a bunch of intellectuals do understand that you must perform a market survey to understand what the customer really wants and then deliver.  And this time they gave us what we needed... TWO PARTIES ONE FETE!

As you entered UWI’s Principal Grounds you were warmly greeted with the laying of the flowered mala on all those who wanted it.  Next was a long series of sponsored promotional booths will all the freebees that your heart can desire from UWI promotional mugs to Bmobile pens and bags.  But the highlight was the last booth just before you hit the bars, the Trini Jungle Juice "Bollywood" Photo Booth!!!

Decorated like a wedding scene straight out of a Bollywood movie with models in full traditional Indian wear, the TJJ Complementary Photo Booth was the place to be to document the good time you had at UWI with free glossy photos given to everyone who visited TJJ!

The grounds were laid out even more effectively this year with food to the east, bars along the main street, and TWO LARGE STAGES on either side of the Principal’s Office building!  This allowed for two clear distinct party zones with performances starting up on one stage as soon as a performance ends on the other stage!
This year the food included Creole, Authentic Indian (Aspara ... thanks for the bess curry goat and Moet), Baba Ghanoush and the Taste of Arabia.  The Sunday Food was not exactly like how Granny used to make, but it was good enough.  And how could any caterer loose in a Bollywood themed party with serving curry, I must say the Curry dish that was BESS! 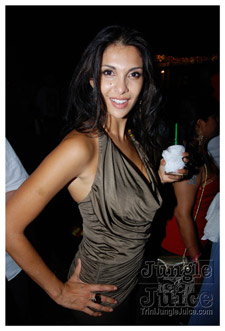 The entertainment was suitable for this mature crowd with Kes the Band and UWI musical staple Roy Cape All Stars.  Roy Cape was first with Blaxx continuing to make crowd get on “Dutty” and left them “Breathless” with his “Tanti Woi” C2K11 hit!  Also supported by Roy Cape was a better prepared Benjai backed by four classical Indian dancers showed his national colours with “Trini” and made everyone “Wine to the Side” “Over and Over!”

Kes was solid as usual making everyone get on “Wotless” and even threw in a quick vintage calypso much to the excitement of the crowd.  But the highlight for me was Black Stalin backed by Roy Cape for the All Stars’ second performance on the second stage!  Stalin hit them with “Black Man Come to Party” and his slew of classics. And who could forget the tassa band that made their pulsating way through crowd!!!

A fantastic time was had by all! And as UWI continues to build this fete BRIC by BRIC (Brazil Russia India & China) I guess the next stop will be Russia!