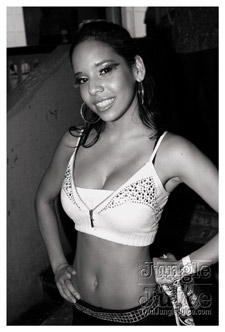 Although the fete started at 5pm, I arrived with Daddy Juice (late to pick me up of course!) at St. Mary’s College around 7:30pm. We had to park quite up next to Zen nightclub, but I must say kudos to the organizers, who already figured out that parking would be an issue, and had organized shuttle services to and from the fete. It was quite wise and gave an extra inch of safety, kicking off our night on the right foot!

The main entrance was on Frederick Street and you were welcome by a glowing and very sparkly floor! Are we on holy grounds or what? Another thing I quite liked was the separation between the eating zone and the party zone. It somewhat gave the effect of a relaxation area, where you could actually mingle, talk and hear others talking without having to shout. Big, big plus for me. And as the promoters seem to have thought of everything, screens in the food zone were available for those who do not wish to miss an inch of the action taking place on the main stage.

So we actually started the party in reverse mode, and went to the food zone first which was located on the right next to the chapel. Now, I’m not sure if Fete with the Saints had this much food in previous years, but whatever you could think of was there in 2011! Name it… burgers, Thai, Creole (they had a nice breadfruit oil down), Chinese, Bake and Shark, Geera Pork, Pholourie, Doubles, Stuffed Dumpling with Curry Crab, some hot Roti with the skin cooked in front of your very eyes from Khanhai's Roti (St. James). There was food was days… and it was all TASTY! Yes, yours truly sampled almost everything! The one negative for me was that food and drinks were in two separate zones. To make matters more practical, they should have had at least one bar in the food zone.

As my belly was merry, I moved to the action in the main school yard, but as I reached... Dil-E-Nadan had just finished their performance, so we didn’t see it. Now I didn’t mentioned that the food court was very quiet so I got very surprised when I reached by the stage and it was PACKED, and from what I saw people know how to enjoy themselves at 'Fete with the Saints'. 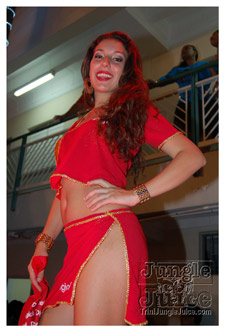 Next on the stage was a former CIC student, B.Wils, who’s now dabbling in the Soca ting with his 2011 song “Borrow Yuh Gyal” ... Beware! I wonder what is the interest rate? :-) His performance was followed by Patch, Yankee Boy and Cassi delivering “Head Nice”. Cassi had the crowd winning on every “Town Ting” there and probably some non town ting as well! Of course TJJ had to wine up on a few town tings too. Some models in Trini Revellers 2011 costumes joined them on the stage, bringing some colors and reminding us that carnival Monday and Tuesday is right around the corner! Oh GOSH… AH CYAH WAIT!!!!

And then… what we, or should I say what I was waiting for, finally came! Cause yes…even if I saw that performance two times already I can never be tired of watching that waist pelting and wining.....**sighs** Mr. Wotless himself and his band! Of course y’all know I’m talking about Kes the Band. It was the usual songs… “Thunder”, “Jepp Sting Naina”, “Right Dey”, with a wink to Lil Rick’s “Go Dung”, the famous “Town Ting”, Benjai’s “Trini” with a nice tribute to David Rudder’s “Bahia Girl”. This would of course not have been complete without sexy Kees giving us his “Wotless” attitude inviting a lady from the crowd to join him on stage. The cute part was mommy and daddy Dieffenthaler were in the crowd and gave their blessing to Kees’ outrageous behaviour... after all, as he said himself. “Ah woking!” Kees wok wok and wok harder!

Rounding out this year’s performances was the Roy Cape All Stars who seems to be getting more and more solid as the season rolls along. Blaxx, Olatunji and Rita ... keep up the fantastic work. And their latest addition to the family according to Blaxx, Benjai, shared the spot light sending the CIC crowd into a lil’ uproar as he sang his classics leading up to his current hits “Wine to the Side” and “Trini”. It was a “Good Time”!!

People if you weren’t there, you missed out a good fete with “Great Music + Nice People”. As a 'Fete with the Saints' first-timer I really enjoyed myself! Now we’re heading to Blue Flames in Blue Range ... the night is only starting folks!