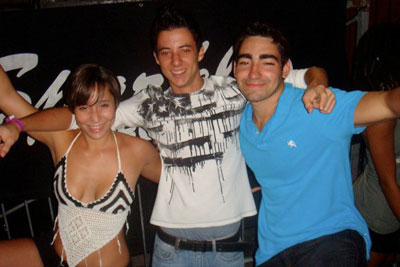 Kingston, Jamaica, January 28, 2011 - Bacchanal Jamaica Carnival is on at the Mas Camp for 2011! If there was any doubt all rumours were dispelled at the staging of the first ever Pre-Carnival Fete held on January 7th, 2011 at the Mas Camp.

Hundreds of soca enthusiasts were seen ‘palancing’ the night away to the scintillating beats of some of the most energetic soca songs by DJ Kurt Riley and DJ Smoke of Renaissance. For years Bacchanal Jamaica’s home, Mas Camp, at 1c Oxford Road in Kingston, has developed a stellar reputation of hosting the best events of Jamaica’s carnival season and this year will be no different as patrons can expect, what Michael Ammar, Director of Bacchanal Jamaica describes as “a premier carnival experience.”

Introduced in spectacular style, the New Year Pre-Carnival Fete is hailed to be a first taste of what Bacchanal 2011 will offer its patrons. Many patrons eagerly anticipate the unveiling of the costumes while other shared their joy of being able to attend a carnival event this early on in the year. One such enthusiast was Jonathan Hernould, who noted that he was enthralled by the excellent selection of Soca with the mix of Dancehall music. “From I entered Mas Camp I started dancing and I never stopped dancing until it ended. I went to three other big parties for the New Year and by far I had the best time at Bacchanal. This is definitely an exciting taste of what Bacchanal Jamaica will offer this 2011 carnival season,” he continued.

With a reputation for the best carnival experience in Jamaica and an energy unrivalled by many, Bacchanal Jamaica attracts thousands of soca lovers each year to its home in Mas Camp for the ultimate Carnival experience. No doubt many will have their calendar’s marked and rags ready to jump and wave on the official opening night of Bacchanal Friday’s February 18th 2011 at Mas Camp at 8:00pm.

For further updates please visit the Bacchanal Jamaica website at www.bacchanaljamaica.com for the most up-to-date carnival info.