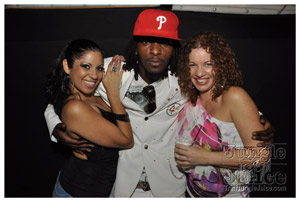 So we got to Blue Range and after catching our tail to get a reasonable park because of the many traffic restrictions and residence concerns about people parking on their lawns. After finally touch down on the inside, all I could say was … this is not a fete to reach late for! Even though the Red Ants & Blue Range committee moved the start time of the fete from the carded 10pm to 9 instead, it still didn’t hamper the venue from filling up early.

By 10pm scores of patrons were already lined up at the various food tents waiting to taste the food that had been creating a mouth watering aroma for so long. Folks had no intentions of missing out on the vast variety of food being offered in this all inclusive. The variety ranged from sushi, rib lets, bake & shark, burgers, wings, geera (pork and chicken), curry, kebabs to doubles just a name a few. One surely had a hard time deciding what would be the meal of choice!! With lines at all tents however, I could tell that every option would be a delicious one!

We then headed deeper inside the fete to take in Cassi's “town thing” performance while we wait for the food lines to lessen. We heard many a patron singing along to the chorus ... 'When last u take a whine on a town thing' as we browse through the crowd. He certainly got the crowd participating! 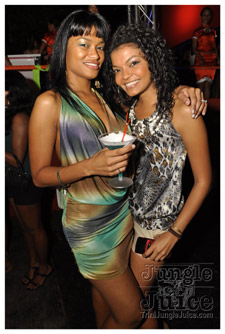 Next stop … the bar! Things didn’t disappoint either. The Angostura cocktails bar was a huge hit as many party goers opted for cocktail mixes. The Carib brew house was also there offering pilsner, black wolf, Carib and stag on tap. Not to mention the tempting Carib girls who were also placing temporary tattoos on willing patrons.

The next performers of the night were Bunji and Fay Ann who seem to be fast becoming a staple at this fete. Bunji was the first to perform and lyrically entertain the crowd, then making way for his wife Fay Ann. Doing their usual “which half of the crowd” is the best antics to stir excitement into party goers. Patrons were also quickly grapping up bandanas that were being thrown into the crowd that said “Consider It Done for Road March” as Fay Ann performed the popular hit for this year. Shortly after Bunji and Fay Ann’s performance, the Makamillion family touched the stage to recite some of their more popular hits as well to the crowds’ delight.

The general layout of this fete didn't disappoint either, as bars were located on both sides of the venue and bathrooms to both the front and back. The only thing missing was a tent for the 35 mins of rain that was not expected!! This drizzle however could have worked as an advantage, stirring extra vibes into the crowd and further instigated by the DJs (big up to Hollywood Sachy & Jase) who stepped up to the plate and took a wetting, while they had the crowd wining low, jumping and taking Advantage of the rain!!! 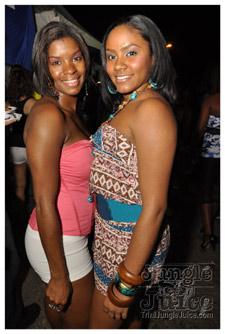 What started off as a segregated crowd of socialites to the back and sides … and a wotless crew to the front of the stage, quickly turned to a huge jamming session with cries of … “ah Wotless!” Pure niceness! The fete ended at 3 pm but some patrons milled around until 4 (guess they couldn't come to terms with the party finishing early). All and in all the fete was yet another huge success that definitely should not be missed!

Your party girl Sunita reporting for the TJJ Fam.