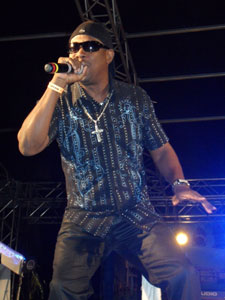 St. Philip, Barbados – After years of being absent from the Soca Capital of Trinidad and Tobago, Anderson ‘Blood’ Armstrong is back with a bang. The former vocalist of Barbadian super band ‘Square One’ and current Party Monarch of Barbados has been generating quite a buzz and leaving a fiery trail en route to his major performance at the International Soca Monarch carded for March 4th 2011.

Although this hard working performer, writer and producer is currently working diligently on his 2011 Cropover releases, Blood has been making his presence felt in T&T at numerous media houses and fete events much to the delight of his hardcore Trini fans.

Blood, who has graced many a Trinidadian stage alongside the Soca Queen Alison Hinds as a part of Square One has been turning heads with his infectious Party Monarch/Road March winning song “Foot on Fire”. Most recently the man responsible for Soca smashes such as “Kitty Kat”, “Turn it Around (The Plumber)” and “Turn it Up” added heat to the Hott 93 Fete in Pier 1 and the ever popular Licensing Fete sharing stages with fellow hit-makers Machel Montano, Bunji Garlin, Destra Garcia and Kes The Band.

Thus far Blood has been receiving a warm welcome back from the Trini Soca-holics who have eagerly adopted his famous “Foot on Fire” dance during his performances.

No stranger to competition, Blood made history as the first artiste to cop the 1st and 2nd places in the Party Monarch. He feels truly blessed and excited to be back in Trinidad and Tobago and plans to put on an epic performance at the International Soca Monarch finals on Fantastic Friday 4th March.

He encourages his supporters, his competition and Soca fans in general to look out for an awesome presentation full of professionalism and vibes.