If You Say So Review

>> View If You Say So Gallery 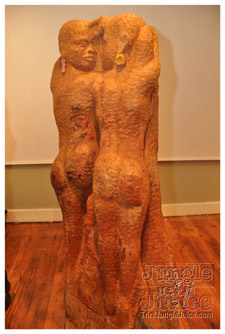 In an effort to cover varied aspects of Trinidad’s Carnival, we attended this current Carnival exhibition. The show is by senior artist Jackie Hinkson, titled “If You Say So”, featuring 14 life-sized Cedar Sculptures, large charcoal drawings, and a docu-film. There were sculptures such as a King Sailor, Midnight Robber, Imp, and Cuatro Player. A real Bess, and it is open for a month.

Here are some words from artist Jackie Hinkson himself on his work:

“This project has been an exciting challenge for me, one that has tested my powers of discipline and perseverance in a way very different from, let’s say, I was first introduced to sculpture some forty five years ago while at university in Canada. Then, I had access to a huge lab, sophisticated machinery and a variety of materials. My thinking then was influenced by the social and cultural environment of North America. My sculptures were conceived on paper and then constructed, mostly in an abstract minimal style. Now, living in a very different environment and without the facilities of that earlier time, I satisfy my need to express myself three dimensionally by carving figures in wood. Of course, this too may change.In executing the works in this exhibition I faced several problems, one particularly challenging, and I made, apart from the expected minor ones, one almost unforgivable mistake.

In the first instance, I had considerable difficulty in establishing the proportions of my envisaged forms because the wood I used, cedar, has an outer ring of unusable sap and it was only after I had started working the figure and removing the sap that I could be reasonably sure of my final proportions. This uncertainty sometimes resulted in unexpectedly elongated forms. Happily, I was able to exploit this distortion to elicit greater emotional expressiveness.  Distortion can be a powerful tool in visual expression.

In the second instance, I trusted my accumulated knowledge of the human form - based on the several hundreds of drawings I have produced over the last five decades - and perhaps unwisely never resorted to a model. In retrospect, I would have avoided many difficulties had I consulted one. 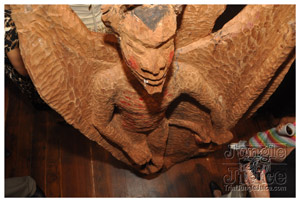 I began these pieces, some of them several years ago, by first studying the muscularity of the wood, its undulations, its gesture. Only when I could match the form of the wood with an image familiar and meaningful to me, would I begin. I  would work on several of them at the same time for wood carving can be a very unforgiving medium and extended concentration on one piece can lead to irreversible errors. Constant adjustments have to be made, either demanded by the wood itself or prompted by intuitive decisions. I cannot over-emphasize the role that intuition plays in my expression. It is interesting to note that more than one observer has pointed out to me that there is a consistency of expression in the faces and gestures of my figures, a kind of distance, disinterest, resignation, an averted head: as if to say ""If you say so"". At no time while producing these works was I conscious of this content.

I wish to thank LuiseKimme for introducing me to wood carving,  Nisha and Soft Box Gallery for their patience and understanding, Marina Salandy-Brown for her writing Arnold Rampersad ( who nick-named me Toc Toc) and Derek Walcott for their observations and criticisms, Sundiata for his technical advice and assistance, Kwynn Johnson for graciously producing the film, my wife Carol, my children for their support, and my observant grandson Sammy who would ask me "Grampa, you knocking?"

>> View If You Say So Gallery