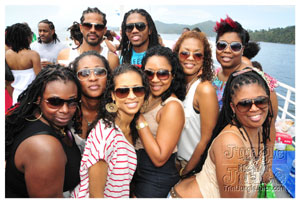 VENUE/ACCESSIBILITY:
We On A Boat! ... LOL .. Cannot Describe It Any Other Way ... The treausre queen is not a "glamour" boat ... it is just a piece of metal that happens to float on water and move when the engines are charged up! The bathrooms are horrible .. but then again ... who wants to piss in style when they come to fete .. I DO! ... Anyhow ... the layout of the Treasure Queen is the absolute contract signature ... you see that top deck ... and when you read the next paragraph you will understand ... Silent Morning Again!!!! 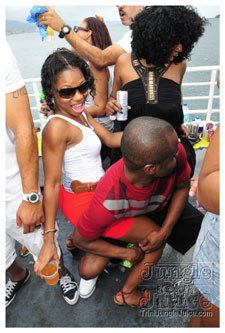 VIBES:
I have experienced loads of boat rides on all different types of boats with all different people but I just want to say that Silent Morning HMPH! ... THIS PARTY HAD VIBES .... and you know what ... Silent Morning should be called NOISY MORNING!!! ... Back To Basics, Private Ryan, and D Bandit ... kill it kill it kill it .... helicopter, Soca Again, Batty Wining For Years ... The only people that was standing up were the ones with full drinks, the ones who posing off, the ones who were chatting and the ones with no stamina ... the other 99% ... We Bubbling, Wining, Aye Gyal, Aye Man, Split, Turn Back Way, Drop Pon Your Knees .... Wheeeeeel!!!! Let us jump upstairs on the top deck ... rain falling, who say we not partying in the rain, and we splashing in the puddles! We want the rubberwaist gyal and all the men who could handle the rubberwaist .. because the whole place nice! There were so many cyborgs on the boat because everybody were wining machines ... getting out of hand, trying to think that tomorrow will never come (I knew at times I wish it would never end),  bouncing their bottoms around, moving their waistlines and wining ... totally Dance & Dingo-Lay!!!!! I cannot commend the vibes on this boat ride anymore ... and as a mere fact of principle, I am going to say this ... you deserve a 10 out of 10 ... I mean it .. from a true veteran ... but you see the nonsense that happen ON the boat ... which I am not going to report on ... only people who were there will know about it ... that is where you lost your mark/grade ... SHUCKS!!! However, that did not stop the girls from working up a storm, wining in circles and having men on their knees ... SILENT MORNING AGAIN!!!!

On a side note ... you could tell this party is the absolute black horse .... Once you have men who are "stoosh" and always coming back for a "wake up call" or what I like to call a "no shame get on bad wassy and love yourself " event .... SILENT MORNING AGAIN!!!! YEAH!!!! 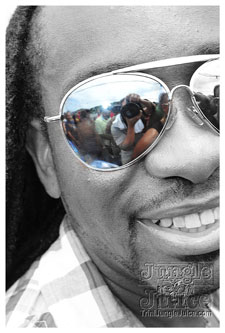 SERVICE:
Now this is a sensitive topic ...
The drama and over acting that took place to get onto the boat ... spoilt it for real people ... the words "foolishness", "this is ridiculous", "rubbish", "jah" ... were being expressed and I have to agree ... There should be an hour or two hours in the next board meeting or in the post mortem for this committee to sort out the entrance on the cruise ... firstly ... my humble advice ... Get Barriers to form a Queue ... Secondly ... get another scanner! .... An Orderly line would have moved smoothly and quickly ... Simplicity!

COST/VALUE:
Well at $300.00 TT or $50.00 USD simple conversion for a ticket just as your boarding pass - I am going to simply say - This By Far Is Absolutely Worth Your Money for the experience!