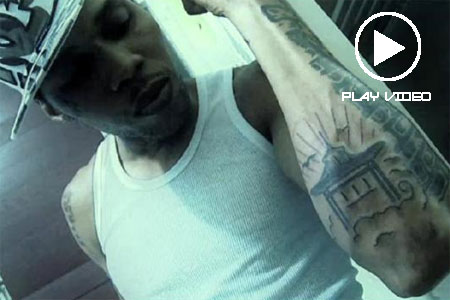 Boasting well over 20 tattoos on his arms, chest, neck, face, and hands, Kartel spits his usual lyrical freestyle fire while actually getting yet another tattoo in "Coloring Book." Gyal a tek picture of me body/me can't tell de gyal she no/ Me hand dem favor works weh done by Michelangelo, Kartel raps in "Coloring Book," also mentioning that he will soon surpass American rapper Lil Wayne in terms of number of tattoos.

In the four days since its release, "Coloring Book" has racked up nearly 100,000 Youtube views.

"We were just on the ends (hanging out), and decided to do a performance shot, so I'm happy that the viewers have received the video so well" says video director Kirk Lee of RoadBlock! Films, who also worked with Kartel on the videos for "Jeans N Fitted," and "Dumper Truck/Neva Get a Girl."

"Coloring Book" is one of the lead singles off of the Empire Universe: Second Chapter album, which was released on iTunes and all digital outlets earlier this week.