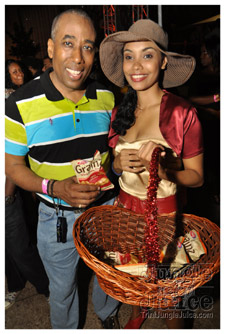 While far from being a fete veteran like most of the seasoned folks at TJJ, in the humble opinion of this Sweet Juice, this has been one of the best fetes for 2011 and probably 2012 too. We arrived at Central Bank's 11th Annual Premier All Inclusive expecting to see some tents, some food and no one in our age group. Boy were we wrong! There were tents … but not in any old venue. Central Bank had procured the entire upper half of St. Vincent Street for the night.
Parking at such a venue was another story. We were directed to the *10th* level of the nearby NIPDEC carpark. By the time we managed to squeeze into the last available spot, we had a view of the whole of downtown POS. Sparkling lights … distant music ...TJJ crew was almost getting in the mood until we realised there was no elevator up on the 10th floor *sigh*.

Karma was already on stage when we rolled in around 7pm. Party start since 5pm and from the looks of it, the crowd was enjoying themselves since 5pm. Despite the large venue, party was ram and people were pumping. Leaving the more dedicated staff to take pictures of Trinidad's most popular chutney soca band, Sweet Juice naturally migrated towards the nearest food stall to check out the goods. 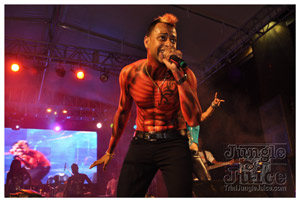 Corn soup, doubles, gyros, wings, fries ... usual fete fare right?!!? Until you realised that was just ONE food stall section. Central bank also provided patrons with an oyster stall ...  I had to specially mention because I loveeee Oysters! Also serving was ice cream- from rum & raisin to vanilla to soursop ... and cheesecake ... and red velvet mini-cupcakes ... and wantons ... and stir fry! In fact, an entire Chinese food stall where you went along and ordered what you wanted from spring rolls to beef stir fry to chow mein.

I have written many a review with thinly veiled disgust at the amount of money spent on an all inclusive ticket just to go home with watery corn soup and one doubles in my belly. This is not one of those reviews. I ate until my stomach became a makeshift resting spot for my camera. Well done Central Bank on actually providing a wide and tasty variety - as an all inclusive should be!

What we also liked about Central Bank was the Angostura Rum Cocktails bar. With drinks like 'last lap', 'saga boy mojito' and 'pink lust', the non- scotch drinkers in the crowd were kept happy all night. While scotch and soda, rum and coconut water or vodka and orange are classics, for the lightweights like me, this cocktail bar alone is worth the all inclusive price. And talking about drinks ... the alcohol can't done at this fete! There was nothing you could ask for that the bartenders didn't have. Once again Central Bank, well done on the all inclusive front!

So far Central Bank exceeded expectations with venue and food. As for the crowd, definitely a more mature group present. What we didn't expect was a good bit of the crowd to be the same people you'd see in the likes of Blue Flame, Wicked in White and any other popular fete. Clearly some of our peers knew a great fete when they see one! What we did expect and did see were quite a number of T&T notaries ... Leroy Clarke being one of those faces. And was there a dresscode that we didn't know about??!! Young or young-at-heart, patrons came decked out to this event. We saw some outfits that had us feeling there was some kinda fashion show on the side taking place! Very well-dressed crowd! Against our expectations again, Central Bank didn't attract a reserved crowd. People of all ages were jumping, wining, waving and generally having a time. If you got tired, there were tables and chairs at the back next to a fountain and away from the speakers. 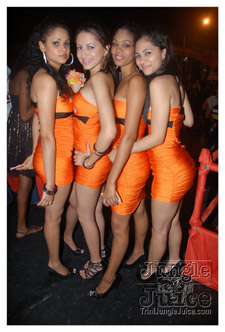 There was also a VIP section but we didn't stay too long. Too cold, too quiet and not enough food for our liking but it did attract those patrons looking for a more sophisticated event atmosphere. Whatever your preferences, Central Bank had a section for you.

Lastly the performances ... Roy Cape All Stars, JW & Blaze, Karma, Tallpree, Benjai, David Rudder, Iwer George, TC, Destra, Swappi, Skinny Fabulous ... lawdamercy! We are sure we miss out somebody in there! Performances can't done! Unfortunately we didn't see much of Karma but it's safe to assume they gave a Bess performance - there's a reason they almost won Chutney Soca!

Destra took the stage next and had the crowd wild. Who doesn't love Destra?!!? The woman around for a while and after every performance it's clear she will continue to be around for a while longer. Belting out hit after hit and looking sexy (didn't she just have a baby?? The woman looking on point!) with some backup dances that were dropping to the ground in a full 180 degree split, we thought this was going to be the best performance for the night. And then we spot a familiar looking tall skinny rasta lurking around backstage ... before we were properly recovered from the self proclaimed 'bitch is back' of Carnival 2011, the beat changed, smoke machines fired up and Skinny Fabulous bounce on stage out of nowhere. Grabbing a random patron's cup from the crowd and swallowing, he had us wondering “WTH” this man drinking ... YOU HAVE NO.IDEA WHAT WE HAVE BEEN DRINKING SINCE MORNINNN!!!! The crowd was beside themselves at this stage.

Said it before and will say it again, we tend to underrate our Caribbean brothers. Skinny Fabulous is a force to be reckoned with. Destra came back on and tried to get the crowd to 'cool it down' lil bit before she introduced the next guest TC!!! Shabba!!! We thought that had to be it there, what with 4 popular performers for the night but then wait …  Swappi came bouncing up on stage in usual grasshopper fashion.

Last time I saw this man with silver hair and beard looking like a Soca Santa. We almost didn't recognize him. I should have had inkling here that it would be impossible to choose my favourite performance for the night. But that was before I was introduced to 'Swappilicious'. Swappi invited a fairly innocuous-looking girl on stage during his “Any Day” song performance.

While I have seen a fair number of “snake oil gyal” in my lifetime, I had not seen this girl with a bottom practically like a separate life form. This gyul could wuk up laaaaaaawd! Then came onstage another tall skinny fella ... skinny fabulous forget something?!!? No, this guy seemed to have no limbs! Legs were swinging up and behind his neck and waistline like a dislocated hip. We had to put away the camera and just stare in astonishment! Where Swappi finds these people??!! It was then that I saw her ... the very well-filled out girl in glasses making her way onto the stage. Then came the defining moment of my life! The moment where I realised I had not lived until I got to experience this event. Skinny #2 and bootylicious performed some twisted dutty wine/daggering/horse ride across the stage. (Readers, you have to see the pictures.) And after that, you have to see swappilicious live. 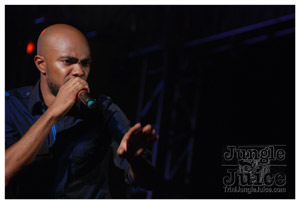 Words will never suffice to describe this, the greatest of my life's experiences. After Swappi left me breathless and in stitches, Roy Cape All Stars came on. Another fantastic performance! It’s really impossible to choose a favourite from this night. Roy Cape did everything from old time classics to their contenders for soca monarch including our favourite … 'Budup! Wadap!' complete with cuffs and kicks onstage from Rita and Blaxx. It was real pleasures watching this band perform.

Everyone from the singers to the guitarists and saxophonists looked like they were truly enjoying themselves and what they were doing. Their wide range of songs had something for everybody in the crowd. Again, another group that I feel do not get all the recognition that they deserve.

After all this, we were hungry again. I watched from afar as Benjai then Iwer took the stage. I don't need to describe how well-received these two were with such crowd-pleasers like 'Ah Trini', 'Wine to the Side' and 'Come To Meh'. Like Benjai, soca star Iwer had the crowd roaring from the first 'Oye Ya Yoi'. Next thing we saw David Rudder roll up. If you don't know who this man is, welcome to Trinidad and Tobago stranger.

Truly, Central Bank had something for EVERYBODY that night. And lastly, JW and Blaze wrapped up the party with 'Palance' and 'Wild & Frisky'. If it wasn't for the miracle of swappilicious, JW would have been my favourite as always. So cute … so polite … so nice … so bald. Somebody please give this man my number.

This was TJJ's first time in Central Bank but the 11th year the Bank has hosted this event. If the past 10 years were anything like this one, we have been seriously missing out. Good food, good service, endless performances and good crowd ... at 500 dollars, this was hands down the BEST all inclusive I have been to. Central Bank, you seeing Sweet Juice next year for sure!

Sweet Juice aka Noni Juice (it's good for you)