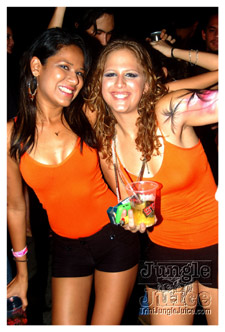 What a night! TJJ had Brydens, Fatima, Temperature 4,UWI Campus Carnival and Yuma to cover that day but if there’s one party that we had to make sure and pass through was Karma Sutra X (Yes one “X” not three, don’t let the name fool you). “Ten years of Pleasure” and what better way is there to live up to that name than to make it a free drinks event, have doubles and corn soup inclusive of the ticket price and have Karma and Imij & Co perform? The promoters really outdid themselves this year as usual (Big up to Rene!).

Now I don’t know if it was the free drinks and doubles or what but the crowd was niiice. That had to have been one of the more outgoing and interactive crowds for the season,also, there weren’t too many stush stushs who didn’t want their picture taken. I guess the fact that parking was a breeze, the venue was impressively laid out and there were sexy people from wall to wall had everyone in good spirits.

As for the performances, we arrived about midway through Karma’s performance but even half a performance was enough to “wow” you. We managed to witness Ravi’s “Cyah Come”, Nisha’s dancehall segment and Gregory’s impressive display of vocal talent as he performed a wide range a soca hits past and present from various artistes. Yep folks...all that was half a performance. After a nice corn soup and doubles break was the final performance Imij & Co. We got a blast of a performance from Michelle Xavier, Ricardo Drue, Russell Cadogan and Ghetto Flex as they launched hit after hit into the crowd, in particular Michelle’s 'Fetting for days'. Imij really gave it their all as usual and the crowd seemed to be extremely jovial because of this....as usual. 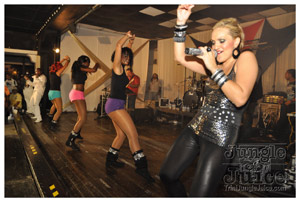 Just when you thought the party was over and everyone was walking out the tassa start to play! And booooi you should’ve seen those girls wuk up dey waist. You could’ve sworn that the party started all over again. However, it was a long day and even longer night for the TJJ crew so we snapped some tassa pics to make our viewers who weren’t there see what they missed and were on our way out. It was a great end to an even greater fete.