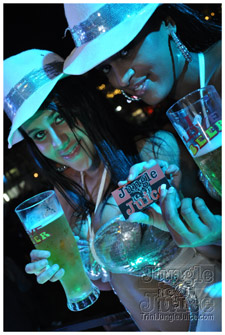 Believe it or not, but this was Trini Jungle Juice first time attending Fatima College All Inclusive and I was pretty excited having heard lots of positive feedback from previous years.  Fatima don't even bother to advertise their fete anymore, and it SELLS OUT with ease! So our interest is surely peaked...
We arrived around 6ish to Fatima College, and ample parking was provided on their sports ground so parking was a non issue. As you entered the venue, premium drinks were offered by very welcoming hostess. Without any hesitation, I was in the line for champagne. The main stage was located at the back of the school and I must say the overall decor/setting was actually very nice. Blaxx and The Roy Cape All Stars were now starting their set with "Tanty Woi".  Around the stage were multitudes of stands, from food to drinks to make up (yeah, I said make up!) to tattoos ... it was all there. And let me tell you, THE FOOD WAS BESS! Definitely the best food I've had at a all inclusive to-date. I was in love with the "Peking Duck" ... I sucked my fingers with the "Suckling Pig" by the Oink Oink Crew ... I enjoyed the "Chicken Masala" very much and the "Crab and Dumpling" and the fried "Wontons" were amazing. Next year, TJJ will definitely go brave and try the "Wild Meat"! 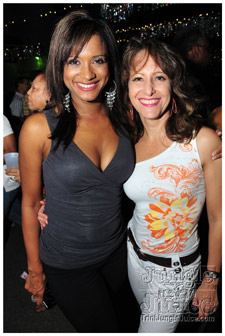 The second BIG plus was the drinks! I never saw that many premium drinks tents before, and although I'm a vodka drinker there were drinks for everybody... Silver Patron, Johnnie Green label, Absolut, Angostura Single Barrel, Baileys, Hennessey and much more.  And like if the organizers of Fatima thought of it all as there were stands specifically for the ladies. From Avon offering make over's and giving out samples to a stand offering glitter tattoos. But the biggest plus for the ladies was the lockers, giving women the option of wearing their flats and getting rid of the heels when they become too painful. So next year, ladies remember to walk with more than a pair of shoes! 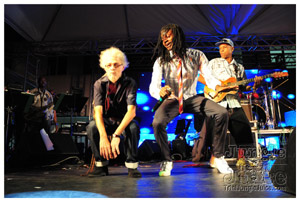 Around 7:30pm, Blaxx was getting on "Wotless" on the stage having the crowd wining. The second performance of the night was by Iwer George who really put the crowd on fire with his 2K11 hit tune "Come To Meh" ... I'm personally a fan. And what better than some "Water" than to ease a "Trinidad" crowd on fire??!! In between performances MC Nikki Crosby entertained the crowd with a "Husband Wining" competition on stage were hubby's were competing for a beautiful necklace for their wifey!! If you weren't there you missed out ... them fellas rhel misbehave or should I say, since it's the word for the season, acted wotless ... winning on the ground, on speaker box and more! It was good, clean fun!

Around 10ish Destra Garcia and her band were getting ready to come on stage following a solid performance by Dil-E-Nadan featuring Raymond Ramnarine, Derrick Seals and Candi Hoyte. Destra looked as gorgeous as ever! It was the 1st time I was seeing her for the season and she was amazing. If you see people wining on the ground .. on tables ... they went insane! My favourite part was her singing "Cool It Down" which is a great groovy track for 2011. Good luck for Soca Monarch Destra! On stage she was joined by Super Jigga TC for their combination "Feel To Wine" and later by Skinny Fabulous straight from St. Vincent and TnT's 3D artist Swappi who put on one heck of a show with his 'swappalicious' dancers. 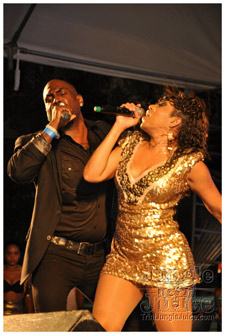 Around 11:30pm, Destra's performance ended but let me tell you, the Fatima crowd was not ready to leave and were still winning to Machel's "Bend Over". For the TJJ Red Team, our night is still young with Temperature 4 and YUMA's Neon inclusive to still hit. Special thanks to Kevin and the entire Fatima Old Boys Association for inviting TJJ to experience their fete "SHINE" for all to see in 2011.  See you guys next year!!

Seeking out all Illegal Wines,
Heart Attack Juice
(Chooks aka Daddy Juice contributed to this review)