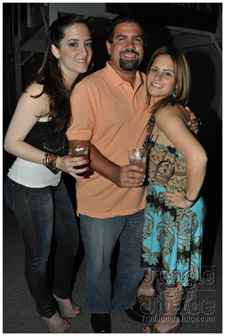 Upstairs, there was some free food available for the ladies, consisting of cheese and crackers, sweets and sushi! Going on the second floor didn't just crave the appetite but made for a good view for the performances and the crowds hype!

About 1am they held a Dance-Off Contest with four ladies competing for an AMEX gift card worth $100! These women weren't joking when they said they were competing to pay their bills and get some new weave! When it came down to two girls left, I felt like I had entered a Vybz Kartel Music Video! Dutty winen, splittin and poppin, they had the crowd on their feet raving for more!!! (Not to mention most of the crowd in front was men of coarse!!)

REVEAL gave good vibes the whole night! The room unfortunately wasn't FULL and deff could've been promoted a bit more with everything that was going on! If there were more events like this, and being better publicized, it will become the new take over of the Miami partyin scene! Bigg up to Inglorious Nation and Mad Empire for an event different then the rest!