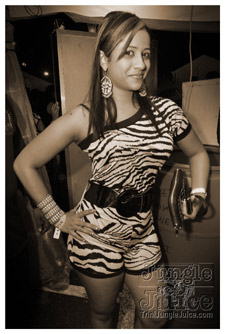 Ah “Cyar Come When Ah Drink Rum!”  But that did not deter the crowds from coming to the newly improved Marvin Lee Court Yard at the Centre of Excellence!

I guess that the word is out … Brydens All Inclusive IS a Must Go To Fete!  Brydens has always been the best bang for your buck.  At the affordable price of 2 tickets @ TT$475 each (same as last year) Brydens featured an unstoppable bar, all the free premium food that one could want and FOUR big bands: – Karma, Roy Cape All Stars, Imij & Co. and JMC 3Veni!  And seriously, who could buss a Brydens Bar??!! They sell the most of the premium alcohol that we drink, so drinks could never done!!!  I guess as a distributor of fine wines and assorted spirits they can have a limitless bar and keep costs down.

With high anticipation of the long night the TJJ family had ahead, we made our way to the food court to follow Skinny Fabulous’ advice to “Charge Up!”  There were many stalls serving an array of delicacies from Chinese to Indian to Creole.  Fried wantons were my food of choice for the evening but the over all culinary highlight were Crab & Dumplings. 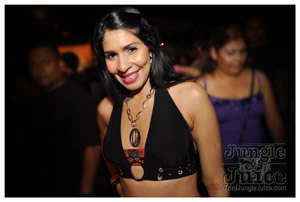 The DJs had the fete pumping and there were sweet Ace Promotional Girls distributing the specialty drinks everywhere! What else could one ask for? ... Well maybe a fantastic performance of the sleeper hit “Fete-ing (For Days)” by Michelle X from Image & Co!  Giving it her all and using no back up tracks, don’t be surprised if Michelle makes it into the finals of the Power Soca Monarch on Fantastic Friday!!!

And once again the musical highlight of the night was certainly the band Karma!!!  They certainly held their own in all genres of music.  Nisha B. handled the Pop & Soca (and Faye Ann yuh better watch out Nisha doing yuh songs as good you); Gregory Ayuen delivered on de Dance Hall & Soca; and Ravi B. took control of de Chutney!!!  This dynamic trio, with simple dance routines, understood their own vocal ranges and appropriately took the lead on the various tunes of choice!  And then Ravi B. mash up de place when he dedicated his Chutney selection “Cyar Come” to former Win TV Crime Watch presenter Ian Allyene who was present in the audience!

Now with performances promised from four big bands, we were wandering how they were going to fit it all into one night??!! Well after Karma’s performance at almost 11:15pm, we thought patrons were in for an extension in partying hours, because in no way was Roy Cape All Stars going to do a complete performance in a mere half hour … lawdy! As time lapsed however, we soon learned that the band Roy Cape who was on location was no longer going to perform. Time constraints and Police orders relating to the cut off time of the event being the main reasons. Alternatively the night closed with an extended serious tassa drums secession which eventually led to the ushering out of patrons from the Bryden Zone!  I must say it again Bryden’s is de Bess Bang for Yuh Buck!  Bryden’s C2K12 here I come!