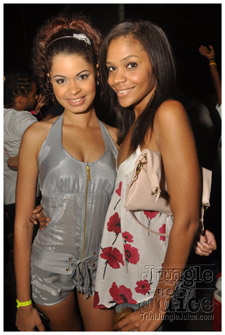 This is always a great event that you can just lime with your girls or boys, have as much as your can drink (because you bring your own) and party without any pretenses because it located on the tennis courts.  It is like having a huge backyard party with a thousand of your closest friends.

CROWD:
The venue was pretty crowed especially when you moved closer to the stage and around the lighting scaffolding.  Which was difficult to navigate because of all the dancers and coolers which were easy to stumble over.  My favorite cooler was the baby pool which you could use to chill your drinks and cool off at the same time.  Several coolers also served as stages which some hotties and not so hotties used to show off their dance moves.   A few ladies decided to use the lighting scaffolding for their performances.   This made for some great shows.

VENUE/ACCESSIBILITY:
The tennis courts is a great location for a large open space.   If you were not close to the stage there was plenty of wiggle room and space to breathe when you needed a dance break.   Since it was warm outside pretty much everyone was sweating.

VIBES:
By the time we arrived the fete was full on in and everyone was sweating from dancing.  The DJs kept the crowd moving but when Iwer George came on even the tired folks sitting on the side wall got up to dance.   Everyone was chanting "MOVE Come to Meh".   Toward the end of the night when the drummers came out it seemed like the crowd wasn't ready to go.

FOOD & DRINKS:
Getting into the fete we were greeted by the ladies of Captan Morgan.   The drinks were available up toward the front of the party however I only ventured back there toward the end of the evening when I needed water.   Pretty much everyone there was with a crew with their own self service bar.  And if you didn't bring your own most people were asking me if I wanted something to drink when my hands were empty.  I was good for the night.   The food was also toward the front and smelled amazing when we came it but I didn't get a chance to try anything. 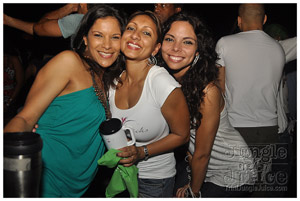 SERVICE:
Everything ran smoothly.   The event didn't appear to have any issues.

COST/VALUE:
For the food and entertainment the cost of the fete was reasonable.