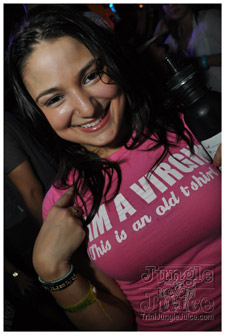 CROWD:
Young, Hyper, Wild and Drunk! Nuff said :-) lol... Rise definitely attracted a pretty young crowd who came out to have a blast this Carnival Friday as we eagerly awaited the results of the 2011 Soca Monarch Finals... the crowd was a good mixture and if it's a young ting yuh want then there was plenty of eye candy!!!

VENUE/ACCESSIBILITY:
Well this fete is usually in Moka and we hear a last minute change meant it switched to the Oval... some patrons were not impressed as apparently the Moka venue was a little on the sexier side!! So anyway it's the Oval...it's big.. in fact huge, and tonight it was packed with groups of friends digging in and out of their coolers and getting very tight very quickly!!! Head Nice!!! Privilege managed to fill this venue to capacity but let's be honest what else can be said about the Oval.. they can't really decorate the concrete or the sky and make it fabulous!!! LOL... Having said that, bars and toilets were easily located and with this type of fete you tend to lime with your crew based around that well guarded cool box on the ground so what else do you need??!!!

VIBES:
Now don't shoot the Posh Juice if you yourself love a cooler fete... but honestly the vibe always seems to be a little weird... why? Well because it's like 100 mini fetes inside one big one!!!! Crews tend be over possessive of their cooler (or plastic bag on the ground in some cases... a.k.a the Ghetto Cooler!!!) and therefore turn their own little crew into a circle where they dance around the cooler and pretty much don't move unless the bathroom is needed!!! On top of that...is it me or do people rapidly over drink in an attempt to empty their cooler as soon as possible so they don't have to carry the heavy ting home!!! LOL...so despite my own Posh dislike for the cooler fete, all the little 'mini fetes' were indeed having a blast... TJJ lose a jersey to an eager young lady who decided to strip in the fete as the TJJ media top was looking more appealing than her own choice of outfit !! We still don't know where it ended up!!! Drinks were flowing both from your own cooler and the bar and the ladies especially were getting into the carnival vibe. There was also a huge stage in the middle of the venue and due to soca monarch the artistes came on stage pretty late.... we remember getting briefly 'swappified' but the rest is all a drunken blur!!! 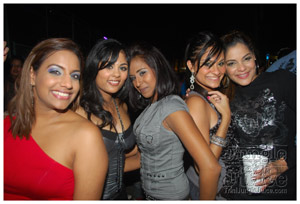 FOOD/DRINKS:
Well in a cooler fete, it's hard to rate the food and drink... when it's you that bring it ! LOL.. However there was a fully stocked bar where you could also buy bags of ice if you needed a top up and although we didn't get to sample it we hear there was good food on sale all night... A corn soup to sober you up on the way out was much needed for most!!!!

SERVICE:
Organised, to the point and no surprise to see there were no long lines at any point. :-)

COST/VALUE FOR MONEY:
Limited tickets at $200.. then rising to $250 and we think maybe even more.... It's pretty cheap and you can't go wrong with a ticket at that price on Carnival Friday night!!!