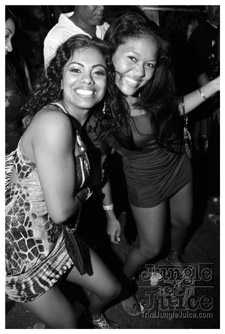 The idea behind Carnival Friday is simple ... you party as HARD as you can because there are only four more days left for the season! With a ridiculously huge variety of events to attend tonight especially the most anticipated soca monarch competition in the last thirty years ... we decided we will still attend one of our favourite events Girl Power. This event has been well known over the last five years and has never let us down or made us feel as if we have wasted our time ... It's 2011 folks ... new decade ... THINGS CHANGE!!!!!

CROWD:
So from a male perspective - the title of the party should give it away ... Girl Power ... Endless Females ... Endless ... Your Eyes Could make 360 degrees in your head looking at females. Both of a high calibre and of gorgeous quality ... even though ... some more eye candy were in Blue Range (just my opinion) ... Ladies ... I am not sure if there was that sparkle of eye candy for you ... but I got chatted up ... so maybe there was! Now you might be thinking what about the size of the crowd ... well ... it was ram! That's right! Ram! Even with five events on the same night!

VENUE/ACCESSIBILITY:
We are back at Jenny's Car Park ... yet again ... As I say ... In the heart of town ... the middle of the bronx ... every taxi will pass there ... all cars must alight ... where else but around the savannah to have a fete ... guaranteed not to be lost .... Parking can be tricky but hey ... accessibility is important! The stage has been the same for like forever, and as always with Jenny's ou have the wonderful stairs in the middle of the dance ... The ones where those meerkats and elephants in uniform stand up on and tell you not to linger ... I complain about them because they do not know how to speak to people ... those baboons!! Spoilt part of my night I could tell you that!! 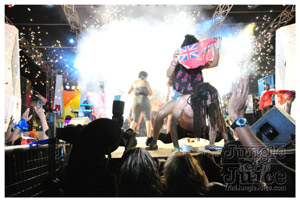 VIBES:
This one is hard for me ... very difficult to explain what we experienced tonight. With all the drama of Soca Monarch in the air tonight, we wondered who will actually turn up and perform at Girl Power. Kees won the Grovy Soca Monarch by a small margin I was told and well hey! thank god he won ... his performance delivery was superb tonight especially especially especially when singing 'ting! ting ting ting ting ting' ... A Thick Ting! A Slim Ting! A Medium Size Ting! YES! They were all on stage taking a very good JAM UP on Kees ... humble as a mumble Kees ... delivered very well!

Now Queen Destra was supposed to perform ... but we still waiting ...

After a long long long pause ... so long we had time to eat food, drink shots, stand up and ol' talk in the back, make new friends, wine up on old friends ... on stage came the Soca Monarch champion ... Machel HD ... yes all heavens and high hell, angels and beelzebubs alike ... advantage champion ... well here we have it ... Normally one of the best performances Machel ever gives every season is at girl power ... this one however was more about him and winning the soca monarch ...

We will admit as usual he sings all the way until the sun arises ... and so he did ... What was amazing though ... even when they stopped playing music ... Machel HD and the ENTIRE family I swear ... were on the stage singing and stamping accapella to "Advantage" ... it was remarkable at the pure sheer euphoria of winning a competition that has eluded him so much ... take win Boy-Boy!

Oh and lets have a round of applause for madame female prime minister ... whats her name ...  For bringing the cheque onto the stage to present it to Machel for winning! Kudos ... 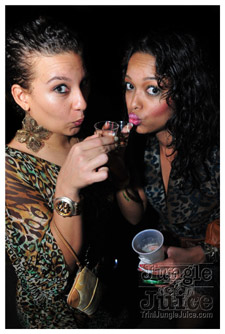 FOOD & DRINKS:
With all sorts of food and drinks available depending on the section of the party that your ticket allowed you in ... the Ultra inclusive side of the fete did not let me down one bit ... courteously lining up for my Accra and my Bake And Shark and lets not forget the Gourmet Doubles at 7:00am ... Yes thats correct ... doubles with Goat or Beef ... JAH!!!! Belly Lashers!!! Bang Bang!!

SERVICE:
Well ... ticket in hand you know what that means? Entry By The Door ... Was it easy to get drinks ... I am not sure on that one ... Drinks were just ending up in my hand ...Although I did partake in the Carib Stall ... and well Drinks WERE FLOWING ... Food line was not long either but when it was long it was definitely flowing and moving ... However, drawing near to the end of the night ... I noticed some Bar issues ... but hey its the end of the fete ... GO HOME! 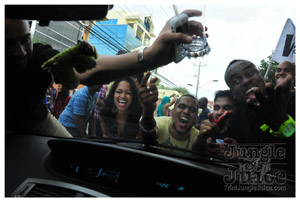