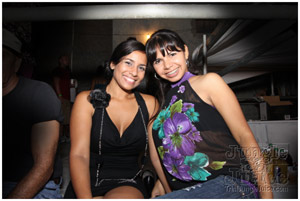 The venue was jam packed, the vibe was nice and everybody was just having a blast. Performances from Patrice Roberts, Lil Rick, Farmer Nappy and of course Machel Montano rocked the stage as people jumped on top of whatever they could find (coolers, other people and scafolding). Police even made an appearance on stage as some excitement brewed in the crowd. An overall very pumped up event.

CROWD:
Mixed crowd, some dressed to catch your eye, some hardly dressed at all. Very open, friendly and very much attracted to the camera. No celebs spotted.

VENUE/ACCESSIBILITY:
The venue was massive but it did not seem so, given the attendance. Everywhere you passed, you had to bump shoulders. Disadvantage to the location was the traffic (both ways), luckily I escaped before the traffic to get out of Chaguaramas. Not much ambiance, more scafolding than anything else. The grounds was a little muddy but not much we can do about that. 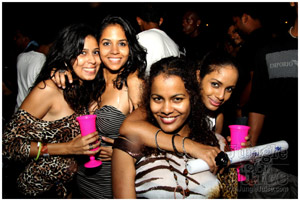 FOOD/DRINKS:
Drinks were plentiful and the food was to my liking (Sushi) but the chit system was the downfall. Minimum required was $100 worth of chits.

SERVICE:
No! Poor! Could be better, before entry we had to be greeted by a moody bouncer at the door. We were not even given bands upon entry.

COST/VALUE:
Unknown but for a cooler fete, it seemed like patrons got their moneys worth.

It was a good experience taking photos for Jungle Juice as everyone knows who you are! The one disappointment was that I expected to get better shots on stage and of the performances in general but because of the stage setup and maybe the limited capability of my lense, I was not able to capture very good images on stage as the performances were so far away. At least the police woman was nice enough to grant access without a band.