By Jonathan Mark©
Published on 05-Mar-11
Well it had pros and cons of this party. Cons was it was in the bush which not necessarily that bad  but for the record like ...
>> View Caesar's Army REVOLUTION ... A.M.BUSH Gallery
>> View Trinidad & Tobago Carnival 2011 Coverage 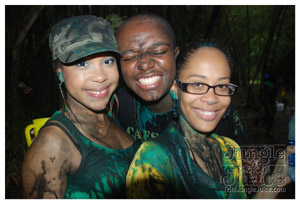 Well it had pros and cons of this party. Cons was it was in the bush which not necessarily that bad  but for the record like any Julius Ceasar party…this had INSANE Vibes eh.

You see A.M Bush had a hidden location where you had a pitch black stretch and after a good 5 min drive you found the “camp”. The thing is I’m probably sure some people turned back because it seemed like a drive to death. To those who had the courage to drive down though had probably one of the best jouvert ever with free drinks, free paint wonderful music where even they imported a top Japanese DJ to play our lovely  soca.

To those who were toting feelings due to Iwer’s loss in the Soca Monarch made sure to get loose in this event where it had absolutely no stushness and no incidents it was just FUN.  All Julius Ceasars party whether it have 10 people to 10,000 it always have vibes. Be sure to look out for whatever they though. Matter of fact there secret locations were real out of the way.

Let me explain the vibes eh. After reaching down to the camp we had to take shuttle to the exact party location. On that drive people were like why so far and blah blah. You know everybody run back down the road wining and jumping with no complaints and never wanting to stop.