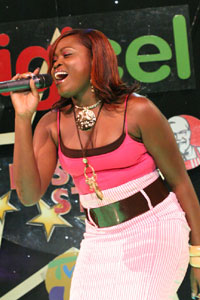 Denham Town Princess, Cameal Davies. made history in the five year competition to be the first female to win the Digicel Rising Stars Competition.

Saturday, October 4 - Kingston, Jamaica: Against thunderous cheers and screams and with a mother running around in excitement at the Courtleigh Auditorium, Cameal Davies, hailing from the Kingston 14 community of Denham Town, emerged to create history as she snatched the well-chased 2008 Digicel Rising Star title.

Davies made history in the five year series to be the first female to win the Digicel Rising Stars Competition after past females contestants like Renee, Dianna Rutherford, Nickeisha Barnes, Lenya Wilks and Jodiann Pantry came close to walking away, but missed out to their male opponents. Davies however emerged with aggressive campaigning strategies and continuous improvements, leaving Kahlil in the dust, and take the cake in all three performances on Sunday, September 28, in what is described as a falter of Kahlil who, according to Judge Anthony, nabbed only the last performance which was "good but too late."

Just before the historic news, Nadine Sutherland told Cameal: "You are an example of what we can expect and what can come from young people, especially in the inner-city communities...Cameal you are an example especially to young females, you are a winner with grace, style and class."

Anthony offered that Jennifer Hudson's Spotlight was by far, the best song selection and performance in this season, while hinting: "You won't be winning tonight because you are a woman, but because you are the best contestant."

As the announcement  of the winner came, many were not shocked, in fact many said they knew that The Denham Princess was going to win since it had many around Jamaica actively arguing about her improvements and her competition of five boys with five crowds.

"I don't know where to begin," the newly crowned Digicel Rising Stars Winner said as she fought to hold back tears of joy. Clinging to her second place winners, Kahlil, Cameal said: "I love them so much."

Davies expressed her gratefulness: "I just want to thank Jamaica, they have been behind us all the way. I say us because it's not just me, but Kahlil, SLR, K'Alee, Lashauna and the entire Digicel Rising Star family...thanks Digicel and big-up Mommy, she has really been behind me and believed in me."

Cameal's mother Juliet was equally in praise:"I believe in Cameal and I knew she could do it so it is no surprise that my baby won."

Runner up Kahlil wasn't feeling bad: "We have no bad feelings, and it's just pure love; we are really happy for Cameal.  We're all champions."

In her performance that concluded the encompass purposive efforts of Digicel, Cameal was flanked by the five Mobay boys as they closed the season of Digicel Rising Stars with Yolanda Adams' Still I Rise.