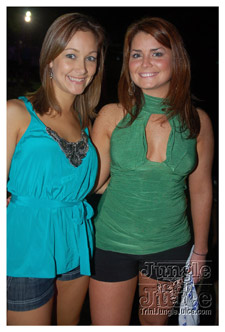 Oh yes, it's that time of the year...Carnival Saturday. And even better, it's that time for the most anticipated event, and my all time favorite  to attend. Insomnia. For those who may be new to this, Insomnia is the event of all events that actually rings in the Carnival right. For the party goers who want to fete from the chilly night into the hot morning sun, and then can't get up untill jouvert morning, well my friends, this event is for you. On to the review.

This year's theme was "7 Steps to the sweetest Insomnia." Ok, let's go through the steps Jungle Juice style. Step one, get your ticket. Alright so I'm media so the Jokey one didnt really have to worry about that, but my my my, did people take step one to heart. The massive crowd present both inside, and out was mind boggling. Reason it was so fascinating, was that I arrived at the venue after three in the morning. Who attends an event, that's not a breakfast party that time of the morning, to still meet people outside trying to get in. Which leads to Step two, link your crew. Ladies came by the dozens, and guys did the same. See them fully attired, glamored out, or in beach wear for...i'll leave that for later. 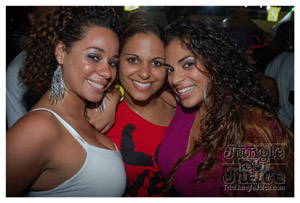 Well like I said I arrived in the wee hours of the morning, and apparently Kess The Band, fresh from his Groovy Soca Monarch triumph had already graced the crowd with a performance. I'm sure he made the non-believers realise why he was awarded the Groovy crown. Kess, that wotless one. Going through the crowd both in the general, ahem, excuse me sunrise area and Bed bath and beyond (V.I.P) was a bit of a task because of the sea of people present. What was the Bed and Bath? Hm, nothing really extravagant, just a sitting area with a good view from the stage, but it doesnt beat the in crowd experience. Anyway, as for passing through the crowd, I persevered and got a good look of the lovely ladies. Djs kept the crowd revited with their selections of 2011's carnival playlist, but step four and five meant that it was time for more live hot performances. And no one knows more about putting on hot like fire performances than the fire man himself Bunji Garlin alongside his wife Faye Ann Lyons Alvarez and the Asylum family. Eventhough neither Bunji nor Faye Ann were able to nab the two million dollars prize for the Power Soca Monarch, they still put on a winning performance. Bringing out guest artistes like Problem Child as 3 Suns had the crowd estatic.

As the sun began creeping up over the horizon, step three comes into play; "at sunrise, take a shot of rel vibes." This is where my anticipation began raising. This was my forth year attending and for the two before last year's, it's scheduled that the king of carnival is to hit the stage at sunrise. Step six, Machel. Seeing that he was absent for the whole carnival season last year, my thoughts were, "How will the insomniacs greet him, seeing that he coasted on us last year?" My question was answered by the time his trademark holler was sounded. The crowd went wild, I should say even more wild than before. Did I mention he is the new reigning Power Soca Monarch? I guess he would have to change his name from Mr. HD, to Mr. two million dollars. He came on the stage and really took advantage of it. Was almost like he never left, or I guess he wanted to show his return to Insomnia as well. 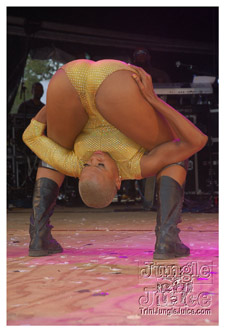 As he entertained the crowd, the final step came into play. And this is the step that all insomniacs were waiting for. Step seven "JUST ADD WATER!" This was something that was also missed at last year's celebration, but we were glad to have it back. Unfortunately I couldn't join the wet frenzy this year, but from what I was seeing, patrons were having a blast.

To end off the performance category, Blaxx stepped on the stage. He didn't seem too happy being the last person, seeing that he was scheduled to be onstage four hours earlier. Putting this aside, he still put on an energetic performance, but concluded to the crowd that this was the last Insomnia he'd be attending. Hopefully for the fans he would reconsider and not let the miscommunication behind the scenes "sour d vibes.""