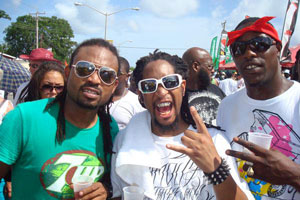 NEW YORK, NY (RHONA FOX, INC.) - Soca superstar Machel Montano brought the excitement and thus the masses to the annual Crop Over celebrations in Barbados, last week. First with the bMobile EnVy concert on July 26, followed by the Brian Lara All-Inclusive Fete on August 2, then performing to a sold-out crowd at Cohobblopot on August 3, and finally hitting the street parade for Grand Kadooment on August 4, Montano was the face of Crop Over this year.

Cohobblopot, a national cultural event, is the premiere concert of the Crop Over season, and after suffering low turnout in recent years, the Barbadian government turned to the top name in soca, the Southern Caribbean's most popular genre, to bring the masses - and that he did. "I'm delighted to come to Barbados to celebrate Crop Over, even though it meant skipping Caribana in Toronto, because four members of my band are from Barbados and so it means a lot to be able to come home and celebrate with them," states Montano, who saw his very first headlining performance at Crop Over this year.


Pitbull and Lil Jon joined Montano for their hit collaboration, "Defense - The Anthem," the first ever performance by all three on any stage. The video for the single is currently in mainstream rotation across the United States and Europe, as well as on all major Caribbean channels. TOK, who were en route from a show in Dominica, said they simply had to stop in and participate in the biggest party in that part of the region. Singing "Fyah Fyah," lead singer Bass-C stopped after a few bars to thank Montano for having them at the event, telling the crowd, "We love Machel Montano."

Numerous international press were present at the celebrations, including Billboard Magazine, which documented the festivities for a featured article on Montano, due to hit newsstands next week. It will be the first ever feature on a soca artist in the prestigious music publication.

Montano will also be featured at the upcoming carnival celebrations in London and New York later this month, but will first journey to the nation's capital where he will join dancehall icon Shabba Ranks in a special "Clash of the Titans" show, on August 15 at the DAR Constitution Hall in Washington D.C., produced by Enjoyment Enjoyment, Inc.

Log on to machelmontano.com or myspace.com/machelmontano for updated music, event pictures and to see where you can catch the soca king in action.