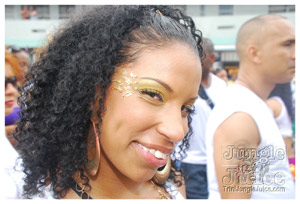 It's finally here. Time to lace up those boots, put on your shining dust, flip your hair and tense your abs. Carnival is finally upon us, and it's Carnival Monday. Wait, they don't wear full costume on Monday? Oh, well i'm sure the ladies will still be beautiful. Well like I mentioned, it's Carnival. And the Jokey one found himself at the beacon of it all; Port-of-Spain. The question was, which band should I follow? I'm a type of guy who wouldn't mind trying or meeting someone new, so let's follow a new band. One such band was Yuma with their portrayal of Zodeak. To the review

Well like i first mentioned, it was Carnival Monday so masqueraders weren't in full costume, but still, the choice in Monday wear really pleased my eyes. Ladies were dressed in white baby t's (some costumized) and yummy boy shorts while guys wore white sleeveless jerseys and tracks with thier respective zodiac sign on it. For those who have been living under a rock or something, here's the definition of zodiac, Jokey Juice style. Firstly, there are twelve zodiac signs. Aries, Taurus, Gemini, Cancer, Virgo, Libra, Scorpio, Sagittarius, Capricorn, Aquarius, Pisces and if you ladies need to know, my sign is Leo. Back to the definition. These are all signs made by the greek to signify a time period someone is born based on the star and certain planet positioning. All that is "mumbo jumbo" because if you ask me, they all looked beautiful no matter what sign they are. 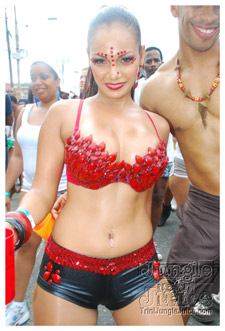 Music trucks were gearing up to make the warm up lap around the town alongside the masqueraders. Djs such as DJ Marcus, Sean Christian, Titan and Dj Barry (just to name a few) were present. Now the band got a move on around midday, which is a bit late compared to the other bands that were already on parade, but you know what they say, have to save the best for last. People were already raiding the drinks trucks long before their chipping rhythm begun. Oh well....c'est la vie.

As we left the band camp to begin our parade, the vibes went up and never came down. Wine was passing more than the salt at a dinner table. I swear to you, if you didn't get a dance from one of the female masqueraders, you either weren't there, did not follow Yuma, or have a Jungle Juice jersey...ooops, did I just put that out there? Sigh, I love my job. 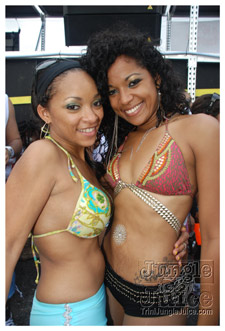 For a new band, Yuma really had the numbers game on lock because of the amount of people participating in this band was very impressive. Had me wondering if some of these packages were given out free. At the lunch intermission, all trucks based at the St. Mary's College Grounds where they were treated to some hot food and cold beverages to satisfy those hungry and aching people in the band. But soon enough, they were back on the road.

Whether it was on the avenue, or near the stadium, or even on the town's stretch, Yuma followed instructions from Machel and took advantage while taking a page out of Kess' book and behaved wotless. From high noon, to late evening, this was each masqueraders peroggative. I wonder how they'll make out the next day when they'll be in full costume.

Thanks Yuma! Day 1 was a blast, you know I'm with y'all again Carnival Tuesday!