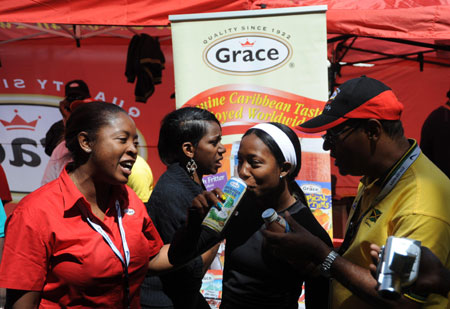 Thursday, April 8, 2011; Kingston, Jamaica: In its 117th staging, the Penn Relays is the biggest sporting carnival in the world and one which is very dear to Jamaicans at home and in the United States. For decades, Jamaican and Caribbean students have made the trek to the US state of Pennsylvania to take part in the annual relays. Jamaicans have played a critical role in the success of the Penn Relays; from the exploits and prowess of our athletes on the track to the vibrancy of Jamaican supporters. That’s the reason Grace Foods, the Caribbean’s premier food producer and distributor, is proud to continue its sponsorship of the games and to trek to Pennsylvania this April 28-30, 2011.

Every year, Jamaicans flock to the Penn Relays to rally their support for their High School track stars who emerge out the also Grace sponsored Issa/GraceKennedy Boys and Girls Champs. These athletes compete against the US’ best from High School and Collegiate teams from across that country.

Anthony Lawrence, Global Brand Manager, shared how much the Grace Foods family views this sponsorship as an investment in our country’s future athletes: “As Jamaica strives to maintain its enviable record as world champions and celebrate the achievements of athletes from Arthur Wint, Donald Quarrie and Herb McKinley to Usain Bolt and Asafa Powell. And with Jamaica’s continued track and field domination, fans will be geared up to discover the next star to blast out of “the sprint factory of the world”.

The Caribbean Diaspora within Philadelphia and the tri-state area counts in the millions and as the Penn Relays take place, the city of brotherly love can look forward to them descending in droves to support the Caribbean teams. This year, Grace Foods will be out in full force infusing the relays with Caribbean food, music and vibes.

And when things get too hot, fans can cool off at Grace Food’s Caribbean oasis in the Penn Carnival Village where they will be sampling a range of Caribbean foods including Grace Coconut Water Plus, the ultimate isotonic sports drink. Grace Foods has captured nature’s best hydration agent and bottled it with that extra oomph needed. Grace Coconut Water Plus contains six essential minerals with a lower sodium content than several other rehydration products on the market today and is ideal for athletes who lose electrolytes on the track and also fans after a long day of cheering in the Pennsylvania sun.

Michael Felici, General Manager of Corporate Partnership for University of Pennsylvania Athletics and The Penn Relays says fans can expect exciting competition: “Caribbean fans can once again expect three exciting days of top flight competition on the Penn Relays track. The sport’s best in high school, college and Olympic Development levels are in the process of qualifying for the oldest and largest track meet in the United States.

“And, as always, outside Franklin Field will be as much fun as inside with vendors, led by Grace Foods, providing entertainment, contests and prizes. We invite all fans, especially our Caribbean friends to visit the Grace Foods display for a taste of home in Philadelphia”

Grace Foods will be supporting Team Jamaica Bickle with both cash and food donations to help with the athletes’ nutrition. Team Jamaica Bickle’s work has continued to ensure the well being of Jamaican athletes in Philadelphia each year. Some 39 Jamaican High Schools participated in last year’s Penn Relays, as did sprint sensations Usain Bolt and Shelly-Ann Fraser-Pryce.

The 2011 Penn Relays run from Thursday April 28 to Saturday April 30. Lawrence sums up what patrons can expect. “It’s going to be a fantastic three days. The best of Jamaica will be on show. Our athletes will bring their showmanship, Grace will bring great food and there’s no doubt that the Jamaican patrons will certainly bring the vibe”.