D'angel And Gforce Gives You "The Urge To Merge" 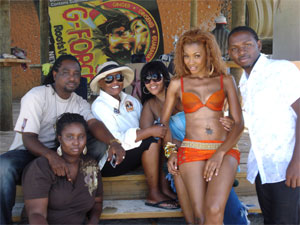 October 3, 2008, Kingston, Jamaica – The G-FORCE baton has been passed from Reggae/Dancehall songstress Tanya Stephens who originally set the foundation for the brand to the blazing dancehall sensation Michelle Downer, more popularly known as D'Angel.

D'Angel will be the official spokesperson and new face of the campaign, which will kick off on October 4, 2008 with a new set of radio commercials blasting the airwaves.  This new media campaign will also include a series of road shows with stops at targeted wholesale outlets across the island to promote the new direction of the brand as well as the new tagline "G-Force gives you the Urge To Merge." D'Angel's sultry image will definitely complement the brand and the new slogan.

"We are ready to take the G-Force brand to another level and we are very confident that with D'Angel as the new face of the brand, we will have that opportunity to penetrate the market," stated Karlene Walters of J. Wray & Nephew.

The G-Force brand is produced and distributed by J. Wray & Nephew Ltd., and is a roots wine which is heavily cane based and also contains several potent ingredients.  One of the main ingredients found in G-Force is Guarana – a Brazilian root, which is also a well-known aphrodisiac and stimulant.  The product is said to delay sleep and to help with endurance and increased performance during sex and other activities.