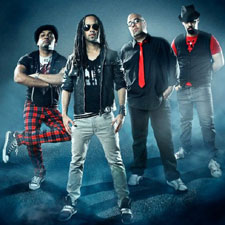 Kingston, Jamaica, April 14, 2011 - Just when you think your Fridays can't get any better Bacchanal Jamaica is set to take it up another notch!

This Friday, Digicel - The Bigger, Better network will take over the final Bacchanal Friday's of the 2011 carnival season for a bigger, better experience.

Patrons at Mas Camp this week can expect to be transported back in time to the ancient Chinese Ming Dynasty. However all eyes will undoubtedly be on the Mas Camp stage as 2011 Groovy Soca Monarch winners Kes The Band and Nadia Batson will perform and ensure the crowd gets on "Wotless."

Versatile is the best word to describe the band that hails from Trinidad & Tobago. All alumni of Presentation College in San Fernando, Trinidad, brothers Kees (lead vocals) Jon (guitar) and Hans Dieffenthaller (drums) as well as childhood friend Riad Boochoon (bass guitar) have come a long way since their days of being known as 'Three bald heads and a Dread.'

Through the years the band captured the hearts of many across the Caribbean with their soulful yet energetic performances and ability to do cover songs in a range of musical genres. However it was in 2005 that they changed their name to Kes the Band and officially became a household name.

Graduating from cover songs Kes the Band began their climb to the top with the release of their albums Lion (2007) and On in 5 (2009) boasting popular carnival songs like 'Right Dey,' 'This Feeling' and 'Thunder.' This year there was no slowing them down as they pumped out hit after hit like 'Where Yuh From' and 'Ah Ting' featuring Kerwin DuBois. Yet it was their carnival anthem 'Wotless' (music video) that saw them achieve the highest honour in soca music; winning the 2011 International Groovy Soca Monarch title.

Nadia Baston stands on her own with hits like “My Posse”, “One Island” and the ladies anthem “Caribbean Girl”. Compilations with Kes “My Land” a true patriotic harmony and “Lighters” with Grenada’s Tallpree in 2011 a jab-jab song displays her vocal range.

No strangers to Bacchanal Jamaica the band will grace our stage once again for the last Bacchanal Friday's of this carnival season as we gear up for Beach J’ouvert on Saturday 23rd April. So if you ready to get on 'wotless' don't miss Kes the Band and Nadia Batson alongside DJ Kurt Riley, MC Bambino and Sparkles productions this Friday, April 15, 2011! Digicel has also promised lots of giveaways and a surprise guest artiste.