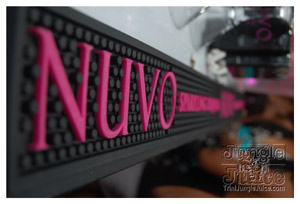 Well I'll start off by saying, what a Carnival 2k11 T&T. I'm still under a heavy tambanca, but somehow I must move on. So many events, so little time.

On Saturday 2nd April 2011, all partygoers rejoiced for the official launch of Nuvo Sparkling Liquer. Now for those who are saying to themselves "Wait, I've heard about that drink before" ... don't worry, you're not going crazy. Nuvo is a New York based drink, that has been mentioned in some star artistes songs and videos such as Sean Kingston, T-Pain and Jamie Fox... just to name a few. Unfortunately they weren't there, but there it was a full celebrity event. 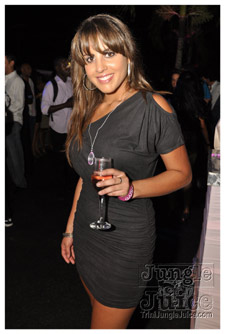 Established people such as Miss Trinidad and Tobago Universe 2008 Anya Ayoung-Chee, media personality Hypa Hoppa, star cricketer Dwayne Bravo, star footballer Russel Latapy, the reigning Soca Groovy Monarch Kees Dieffenthaller alongside his counterpart, the double M man himself, Machel Montano, Destra Garcia, and his majesty Sir Brian Charles Lara; who if I must say felt like he was home for this event. Wait a tic, he was home, because it was held at his home on the Lady Chancellor... lucky him! Oh yes, did I mentioned that local celebrities such as Jokey Juice, d' local Juice and one other juice head was there. Now the third member of the family I'll get to in a minute. Let's talk about the drink.

Now Nuvo for one has a very attractive appearance. From the slender bottle in which it is held, to the color of the lovely liqueur... take win Nuvo, take win. What had me even more intrigued is while conversing with one of the members of staff at the event, who just so happen to be at the bar, she described of what was really Nuvo's selling point. Nuvo is the only drink that you can "mix up" rather than down. What does that mean? It means don't bother buying Sprite or Coke to kill the taste, or down it's intensity. The drink is so smooth you can either drink it straight or mix with other premium drinks to up the flavor. Good job Nuvo! 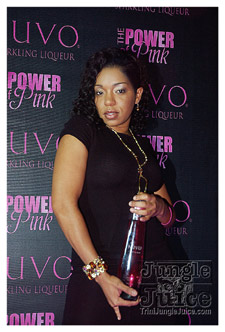 As entertainment, Kees as well as Machel gave the crowd a small concert, just to reminisce on Carnival. But, later on in the night, like a rabbit out of the hat, The Boss arrived. Iwer George came once again and executed a great performance. For a minute, I thought we were getting closer to Carnival rather than walking away from it. Nonetheless, it was a great evening and a great drink.

Now this is Jokey Juice reminding you all to arrive alive and always pace yourself when it comes to alcohol. The "non-drinker" of the TJJ family found this out the hard way.... or should I say, the high way. Don't worry, he's safe. Just the Jokey one and D' local one couldn't stop laughing. Anyway, special thanks to His Majesty for the beautiful venue, and for all members of staff and comittee of The Power Of Pink, hats off. Nuvo... welcome to our shores!