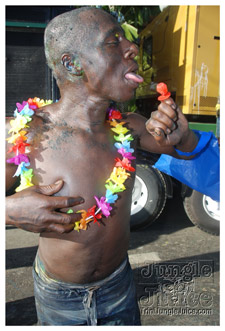 We had a little technical difficulties reaching this band, but when we reached we quickly realized that Whyte Angels was definitely one of the j'ouvert bands to be in for C2k11.

As you can imagine, it had a whole bunch of traffic on the roads so it was near impossible to reach the band, but I was determined. I jumped out my car and started running towards the band until I made it ... and my reward, having the best time of my life!! Every single band member came to have a good time, and Akil and Associate Degree, who are amongst the best sound systems in Trinidad, ensured this happened. Not for one second any j'ouvert reveller stopped wining... it was a site for sore eyes. 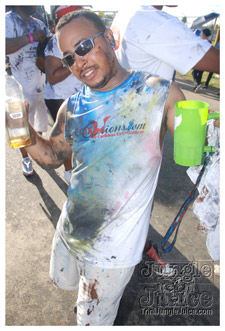 They had a full bar and unlike some of the known bands, Whyte Angels bar didn't buss... they had drinks like rain! And there were no issues at the bar either, as quick as you came was as quick as you left (with drinks in hand of course). So what more can you expect? Beautiful women both from Trinidad & Tobago and foreign, free premium endless bar and a great set of djs!! And with Whyte Angels you could have expected Bake and Shark, Doubles and Corn Soup with fast service.

This was definitely a j'ouvert to remember, and I will definitely be there next year, and the year after that.