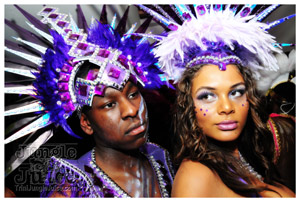 Bachanal Mas has done it again and probably as exquisitely as last year or probably never more exquisitely as any previous years! As always Bachanal Mas devotees who always expect to see them make an honest-to-goodness, rootin’ tootin’ mas band full of lively & astonishing colours will still attain "Mas Nirvana". Okay, so "Traditions" was colourful Mas Band Presentation, but no less than a fabulous one; this time out we are taken to the land of Exotics in the form of Greek Mythology, Gem Stones, Substances that increase Sexual Desire, Predatory Fish, Literature that increases Sexual Desire and Colourful Birds. Exotica is majestic, not just the stuff of a classic pretty mas band but an epic collection of beautiful designs with mythical tones and heart. 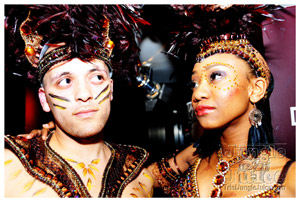 It was inevitable that when Bachanal Mas Band was created that they would bring to London's largest street festival – Notting Hill Carnival - the phenomenally popular pretty mas - a wonderful and irresistibly display of gorgeous and eye appeasing costumes combined with pure bliss and euphoria. At the time of my initiation into Notting Hill one couldn’t have hoped for better than veteran Mas Bands like Poison, Burrokeets, Legends, or even some of the new Mas Bands like TRIBE and ISLANDPeople however, with the designs and mas concepts all stemming from two Trinidadians – I could never be disappointed. Honestly, though, I should never compare Trinidad Carnival to Notting Hill Carnival, but it is where it stems from and some might even say it can be ranked second best in the world. It has great, iconic moments, chiefly the "Chocolate Mas" and it has equally the vibe and similar "on the road" experience as Trinidad. 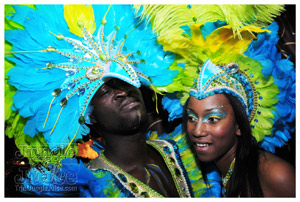 Bachanal Mas – Paul & Richard – returning this year without a doubt have achieved the same thing they do every year from my recollection while also rendering it unmistakably "the best mas band in Notting Hill". They have mined from Trinidad's Carnival every possible colour, bead design, head piece sculpture, bikini bottom culture, and bra design into this mas band and crucially they have been mindful that playing mas with Bachanal Mas for a reveller i.e. YOU, is about what some would say the most significant experience and flourishing event of your life - a journey on the streets of Notting Hill, London where you are scantily dressed in some of the most beautiful costumes Europe have ever seen. Won't you want to be apart of this? 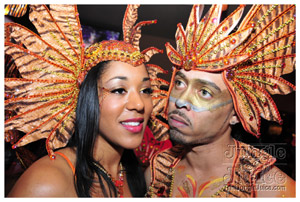 Bachanal Mas' Exotica, in its own right is absolutely exotic. They never attempted to fit into anyone else's boots. With six sections to choose from and all with male and female costumes, I have tipped this band to be literally just that … Exotic. Utilising Pink to describe the Greek goddess of love, beauty and raging sexuality, Aphrodite, accompanied by her favourite Adonis (male costume), as a lover of the colour pink – I must say this has to be one of the most beautiful pink costumes I have seen in years. The eye-popping gem stone Lolite represented by the colour purple, could not have been more estranged than the usual carnival Mas section … especially the male's headpiece. Arousing your sexual desire depicted using the colour Brown, Aprodisiac, I would have to say definitely should just be for the females – especially the frontline section. One of the deadliest fishes in the wonderful oceans is the Lion Fish and while some may consider the mere intricacy of the fish's overall outlook, a simple colour of orange is the chosen one to portray such a devouring predator. Look out for the male headpiece for this section – quite gothic some may say. A Bird of Paradise may have you thinking which Bird exactly? What Colours? Blue and Yellow. Not any ordinary yellow, but a yellow of mass blinding proportions that one cannot stop and stare once visible. However, please beware of skin tones and the colour used for this section – it may not be for all. Finally, what is Exotica without Erotica? Steaming & Pulsating Red to antagonise one's sexual desires however not by reading but using one of the main senses – sight. I have tipped this one to literally do what the section has been named. 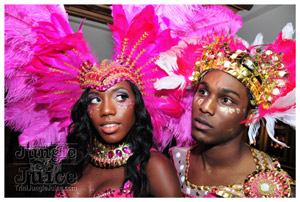 Bachanal Mas will in my opinion, be tirelessly amusing and charming for its poetic elegance of carnival costumes; forever bringing the element of surprise to Notting Hill Carnival and raising the bar year after year. A reminder — like the startlingly powerful band TRIBE, Bachanal Mas on their bandlaunch day displayed costumes/sections which were already sold out!

Bachanal Mas "Exotica" ... The More Vybz Band for Notting Hill 2011 as they subduedly dubbed themselves.