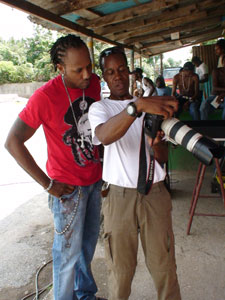 Singer Da'Ville recently completed a photo shoot for his forthcoming album Itchiban. The album is expected to be released in the first quarter of 2009.

Under the direction of photographer Phillip Lynch and the team at Fashozy Records/D-Empire Management, the photo shoot took place in areas across Kingston including Moscow in Waterhouse.

Itchiban which means number one in Japanese will be Da’Ville’s third album for the Japanese based Avex Group label.

Da'Ville who recently performed at the third anniversary celebrations for music video channel Tempo (he performed along with the likes of Sparrow, Machel Montano, Destra, Ziggy Rankin and Denise Belfon), says the new album will contain fourteen tracks.