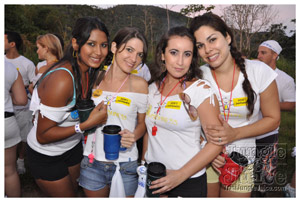 We’ve been waiting for this since last year but on Ash Wednesday the countdown began in earnest as we were longing for jamishness to fill the void left when the last tune played at last lap on Carnival Tuesday.  One month later we were finally chipping down the road again. The novelty of j’ouvert in April still hasn’t worn off even though this is Josie’s fourth year of jamishness. Always one to keep it fresh and this year was no exception. 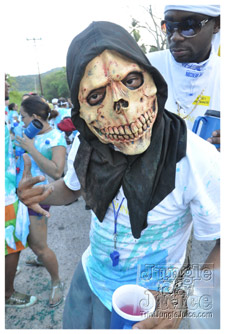 We were skeptical about what to expect seeing that the adult playground in Santa Cruz worked so well in years past but we were not disappointed. This year’s Josie’s Jamishness was a full j’ouvert band with drinks trucks, music truck and wee wee truck. Jammers were shuttled from Pier 2 to the Macqueripe stretch where the band was warming up. Premium drinks were flowing and tunes were playing which helped to cut the early morning chill.

As dawn cracked, the paint emerged and so too did the real jamishness. The winery that ensued was telling that people still haven’t gotten over this year’s bess carnival. Poor unsuspecting joggers, and people making their way to the beach for an early morning swim got a surprise when they bounced up a full on j’ouvert band in the middle of lent but we’re sure they enjoyed it. Lent or not, we couldn’t help but be wotless as DJs Dei Musicale and Private Ryan helped to ease our carnival tabanca with 2011 soca as well as hits from all other genres. 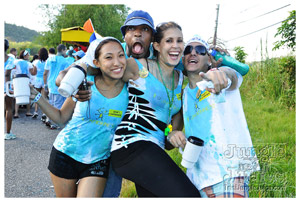 We made it back to pier 2 covered in blue paint and starving just in time to advantage the wide variety of food that was ready and waiting for us. After a quick bite of doubles, bake and shark and BBQ chicken (yeah we were hungry) it was back to the drinks truck and then to cool off under not one but two water hoses provided. Some made their way to the bouncy castles and bouncy obstacle courses that were set up during the time we were on the road. Grown folk, lots of alcohol and bouncy castles… even if we didn’t have the pics to show you, you could imagine the hilarity that this combination resulted in. 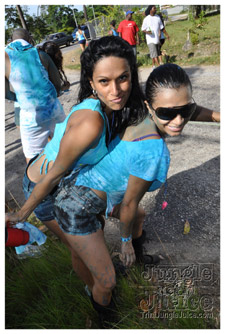 There are few greater feelings than the euphoria of being slightly (ok a lil more than slightly) intoxicated and wet while listening to Soca. Just when we thought it couldn’t get any better Josie climbed up on the truck accompanied by a masked stranger who took the mic and shortly after revealed himself to be none other than Machel Montano HD! The crowd went wild as he mashed up Pier 2 car park with his hits "So High A.O.A", "Bend Over" and of course the 2011 Road March and Soca Monarch winner "Advantage" among other tunes. Iwer then joined him on stage and proceeded to further flatten the dance with his hit "Come to Meh". Talk bout adrenaline and what a work out! After working up that sweat it was back to the drinks truck and under the hose to cool off.

Everything after that was a blue blur but we can say this ... As usual Jordanna’s birthday parday was bess and still remains a can’t miss event on our calendar.

Teekay for the TJJ Fam

Did We Forget Anything? Leave Your 2 Cents Below ...