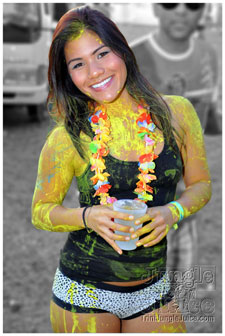 So following Chookie's advice, here I am, embarking on a new adventure! Being a JA carnival virgin (yes, my first one ever), I was extremely excited and curious to see what this carnival has in store, especially being on this reggae/dancehall land.

Having traveled from Martinique via Barbados, I arrived in Kingston around 11:30am, joining Daddy Juice who arrived a few minutes before. With no time to waste, we grabbed a sip of fresh coconut water at Going Nuts (outside the Norman Manley Airport) and off we go ... destination Ocho Rios for the beginning of a sick weekend. The good folks at Bacchanal Jamaica took care of us (as always ... we're practically family now) and escorted us to Ochee in a maxi bus in company of guess who?? Yes, one of TnT's famous soca stars Destra and her full band, dancers included. Of course we cannot forget we boy Super Jigga TC up in the mix.

About two hours later, including jokes and stories of all kinds, a quick stop in front of the famous 'Pom Pom Rock' and a lunch break at Faith's Pen, we arrived in Ochee at The Hibiscus Lodge (TJJ and frens liming spot). The schedule is attractive especially with the monumental annual Beach J'ouvert tomorrow. And being Easter weekend, there were nuff events going on, but we kicked off action at Richie D's "SILK - The Beach Bonfire Edition" down at Caliente Beach Bar & Grill at Mamee Bay Estate on the Friday night. 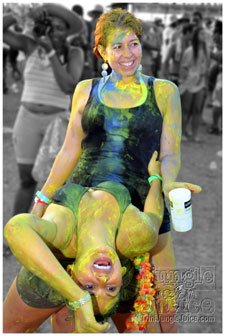 Fast forward to Saturday. With Beach J'Ouvert scheduled from 1-10pm, we got in a mythical place of action cinema: the James Bond Beach around 4:00pm.

The weather was perfect ... clear skies and hot sun, with a speedy plane making mad noise which was training for the airshow happening on Sunday. But anyways let's focus on the bumcee's, ooooppss sorry, I meant the event! Now the party itself took place in a large park - it's not on the beach ... but partygoers were more than welcomed to take a dip in the sea if they wanted.

The venue was well spaced, with various sponsor tents and vendors circling the perimeter. There was also a "No Paint Zone" for those that didn't want to get down and dirty. And like the past couple years, facing everything was the main stage. While partygoers anxiously waited on the jouvert paint to be distributed, most grabbed hats, cups or even buckets to spray paint on everything. Face/Body painting was also a hit. And before I could bat my eyes, folks that were immaculately clean 10 minutes ago, were now immersed in paint ... and the fete slipped into 6th gear! YEAH G6!!

A special area was reserved for the fans of a foam storm, while the sea side was welcoming fans of water just like a wet fete. ALL FUN, more bacchanal, more wining, Act I. Yeah Bacchanal Jamaica planned everything, just MAAAADDD!!! As an all inclusive fete, the drinks were flowing freely, and the vibes kept building nicely. Something about free alcohol always adds a plus to any party! ALL FUN, more bacchanal, more wining, Act II. If you did walk with your belly in hand, there was plenty of food on sale. For my part, I just focussed on bumcee's and the top sponsor Smirnoff! Walking all around the venue, "winers" on site were pretty mixed ... all ages, all backgrounds, all kinda ting ... the new generation in full force.

The vibes was kept on full blast thanks to a wicked line up of well known local DJs ... Kurt Riley, Sparkles Disco, Smoke from Renaissance and Bambino (also the MC on the evening) playing all the big soca hits. DJ Private Ryan directly from Trinidad, held down two sweet sets. 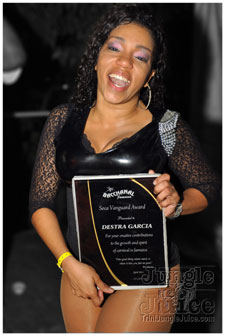 This year's headliner, and the final act of the night, was none other than MISS DESTRA GARCIA! The band started their set around 8pm, and Destra's repertoire was dominated by her Trinidad Carnival 2011 hits such as "Cool It Down", "Welcome Back" and "Proppa" and former big hits such as "Bonnie and Clyde", "Carnival", "Fly" and "I Dare You" along with some very entertaining and unexpected moments, like 'wining battle' between fellas and women (who get on real slack) from the crowd, a Destra 'Bend Over' move for her male fans and a surprise duo with Super Jigga TC singing "Feel to Wine".

Following the band's performance, we had five minutes of emotion and love when Destra was surprisingly presented with a "Soca Vanguard Award" by the Bacchanal Jamaica committee and main event sponsor Smirnoff for her creative contributions to the growth and spirit of carnival in Jamaica. Congrats Destra! We love you too!!

The end of the night was pure wildness with feters getting on mad .. congo line everywhere ... a bend over here, a bend over there ... Beach J'Ouvert was just besss. Once the party was officially finished, we grabbed Destra for our 1st interview for the year, which was most entertaining. Stay tuned to our "You, TJJ and Carnival" Season 3 (TJJ TV) coverage. And big up to Bambino who always hold tings down for TJJ.

With food in hand (thank you Charmaine), it was time to head back to the hotel with the band. I had a blast! Beach J'Ouvert was bombastic!! Nuff said.