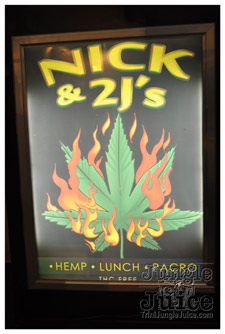 Pink Juice & d’ local Juice ventured down to Crobar food court to attend the official launch and opening of Nick & 2J’s Restaurant. We arrived at almost half seven, pulled a seat and waited to see what tonight was all about. From looking around, we knew that the night’s occasion was going to be small and intimate, but yet we were still in anticipation of what was going to actually take place.

Soon enough however, platters of finger foods began circulating amongst the invited guests. We were asked if we would like to try the “Lobster Corn Soup”,  “Samosas”, “Hempouries” and “Geera Dasheen” just to name a few. For those with a sweet tooth, platters of desert items also made their way around from table to table.

Getting a little more into detail, Nick & 2J’s is the first and only restaurant specializing in food prepared with Hemp. All food is Tetrahydrocannabinol (THC) free however, meaning that no mind alterations can occur from consumption. Chef Nneka Daniel (where the “Nick” originated from in the naming of the restaurant) is also the only licensed importer and distributor of Hemp in T&T, and has begun catering from as early as nine years old.

Nneka says she wanted to continue her influence on the culinary market with a new idea – one that would benefit the consumer – and the idea for a Hemp menu was hatched. So whether you’re curious to taste this unique culinary line or you’re just hungry or even a bit of both, be sure to drop in and take advantage of not only the affordably priced menu items, but also the variety of items offered. TJJ tried the Hemp experience … when are you going to??!!