By Reva aka Cocoa Juice
Published on 24-Apr-11
Wotless vibes were taken to the big city on Easter Sunday to Club Amnesia in Downtown Manhattan. Another highly anticipated event of the weekend, was all the buzz for months! We got the team ...
>> View Kes 360! Live In New York City Gallery 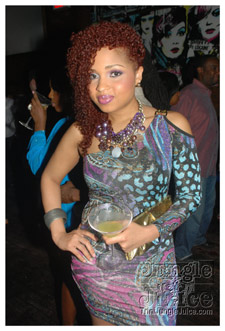 Wotless vibes were taken to the big city on Easter Sunday to Club Amnesia in Downtown Manhattan. Another highly anticipated event of the weekend, was all the buzz for months! We got the team organized this one wayyyy ahead because it was no joke, and pretty evident that KES the Band, was going to take over the big city and shell it down, bringing the back that Carnival vibe people were starting to miss! Perfect timing!

We tried to get there super early, scope out the scene, get a nice little spot. . . but plans mash up! Chinatown traffic = 30 minute delay. Finding parking for an OVER Sold Out Event, an Epic Fail. The lines were super long for both regular and VIP admission. People were not making joke at all to see KES! Rain could not stop them! We waiting for a good bit of time on the long manhattan block, packed with anxious partygoers. Rain start to fall, and we had to bare it! Our cameras made it on the inside before we did! *SideEye*

We finally made it inside to Amnesia to an interesting layout, which made it a bit complicated for attendees to be mobile, especially once the venue got packed like a tin ah vienna sausage. We had no choice but to stay put and sip our $15 cocktails. . .
SLI and Sounds4Life kept the patrons entertained until showtime. Throwback soca tunes and vintage reggae tunes are always a hit! Show time approached and everything was on schedule. We even take a buss ass for Kes, ah fuss we wanted to get personal and get some VIP pics! 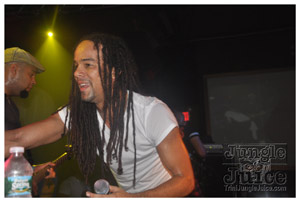 8:30 finally reached and the women began to bawl down the place! Rags and flags waved in the air as Kees and the band took over the stage and put on a sick show. The balconys of VIP overflowed, the stairs were ram, every aisle and corner was filled with a body, whether male or female trying to get a glimpse as the soca fusion band rocked out the club.

KES performed their most popular tunes that took over Trinidad Carnival back in March such as the overly popular "Wotless", "Come Gyal", "Ah Ting" and "Where Yuh From". They even performed some popular soca tunes both new and old from their fellow soca and reggae artist, and took it back for their true fans with a some tunes from their past albums, straying from the soca genre with tunes like "Right Dey", ""Loving You" ft Tessanne Chin, and "Till Morning" to name just a few! They really put on a show!