A Who's Who At Quad's Exclusive Party For Usain Bolt 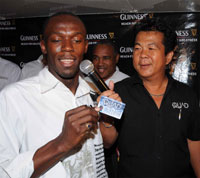 Tuesday, October 7 – Kingston, Jamaica: It was a who's who event at the QUAD on Sunday October 5 as QUAD, Digicel and Guinness hosted an exclusive party private party for the triple gold medallist Usain Bolt.

Anyone who was anyone was in attendance from Politicians, Artistes, TV & Radio Personalities, Athletes, Models, Lawyers, Corporate big wigs and the Kingston jet setters, all to celebrate the achievements of the man of the hour Usain Bolt. 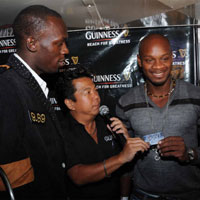 The invitation only QUAD party for Usain Bolt was part of the week-long celebrations to welcome home Jamaican athletes who made the country proud at the Beijing 2008 Olympics.  The exclusive party was hosted by QUAD and sponsored by Guinness and Digicel.