I Love Soca 'So High' Review 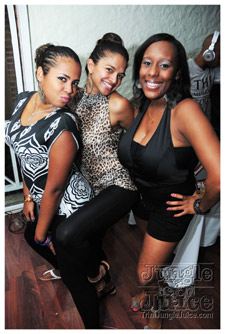 If the trajectory of doing absolutely nothing on Carnival wednesday night was set in concrete then it has now been firmly thrown off course and uprooted with I Love Soca 'So High'. We have to thank Pure Country & Appleton Estate in association with Andrew, Ian, Ricki & Denver for having this event and creating a Soca event for Jamaica Carnival on what I am dubbing "Carnival Wednesday".

A woozy mix of hard-as-nails alcohol and a modern-day fairytale location of Devonshire, Devon House, there were times when this surreal party event could have well been on a friday and nobody didn't think about work the next day. Cause & Effect ... We drink alcohol because it is free and we have paid money to enter an event ... Effect ... brain damage, constant visits to the bathroom & little elves beating drums in our heads the next morning!

I Love Soca 'So High' was not any is no ordinary teeny boppers party nor was it for the weak. After Lime Cay Beach Party Lime AND Pan Fete, this party was definitely for the strong at heart and the Soca-junkies! The idea is simple really - midweek soca bashment for Jamaica's Carnival, it may well be the first party for some of the tourists coming in from all over to experience the shenanigans; free drinks and free premium drinks especially the infamous Appleton; hire some of the best DJs in the business and ensure they are running all the new tunes and then that simple recipe should give you an absolute cracker of an event to start off any Carnival ... but did it?

Devonshire, Devon House with ample parking and in a very central location looks like a remove woodland cottage with ceiling fans and air condition for the inside room while the outside patio for all the "Warm Blooded patrons". With one main bar manned with some very entertaining staff members I would say the layout was well received by the public. The bathrooms as much as they were a short walk away from the event did not take away from anything and not one complaint can be risen about this venue. However, the stairs to go from outside to inside ... can be tricky, especially under rum. 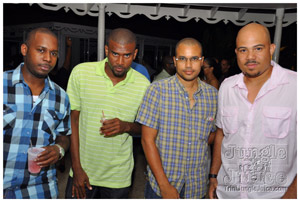 Without a doubt trying to make their mark on the party circuit, hiring Kurt Riley, DJ Smoke, DJ Billy and DEI Musicale (direct from Trinidad) was a definite plus for I Love Soca. I am not one to pay attention to who exactly was spinning at what exact time and who played the "best" tune for the night - only when it is one DJ hence easier to remember under the alcohol - but if these four DJs were there, the music was definitely on point, full of the tunes for Trinidad Carnival 2011 and of course a touch of Reggae and Billboard Top 100 charts (little bit ... after all ... it is a SOCA party entitled ... I LOVE SOCA) were in the mix. I am not one to fault the DJs (and I never will bash them) ... but maybe I had expectations of hearing all sorts of soca albeit in a soca party so maybe some old, some great back in times, some old school Road Marches where was it? Not all soca parties have to be jump jump jump wave wave throw your hand in the air fling your waist like you just don't care ... old school lovers rock soca ... Shibby!!!!!

Not breaking ground on the party scene, I Love Soca was an all inclusive free drinks event and all your skills as humans to hotfoot out of the idea of being high and hammered had to be used in order to stay away from such disasters because the bar was definitely flowing ... 'til the end! One could also tell that the bar was definitely utilised as the amount of empty cups that covered the tall tables in the boogie. Impressive stuff from these drinkers!

Remarkably fascinating - a simple start to most people's carnival here in Jamaica. Guys, hope you have this party next year!