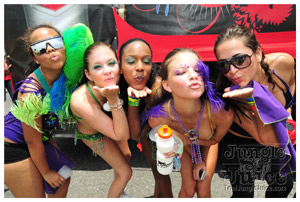 Move Your Body Out On The Road, Put Your Troubles Aside, And Start Living ...

I must say at first I was a bit surprised to hear that there is only one mas band to jump with in Jamaica... but thanks to Fuzzy, Charmaine and Ian Wong you don't need more that one, and that one is BACCHANAL JAMAICA! This year's theme "Once upon a Dynasty" was beautifully captured and the costumes were absolutely gorgeous and well done for a small scale carnival. The different sections are sponsored by different companies such as Pure Country (best juice ever), Digicel, Appleton, Bacchanal Babes, Fame 95fm etc... and you will stay in your section at the assembly point and during lunch time, other than that, you were able to float and wine around and in between the music trucks. Bacchanal Jamaica is a definite party band! 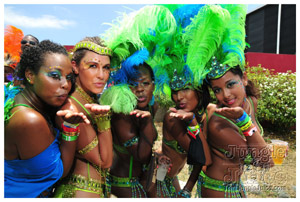 This has to be one of TJJ's favourite carnivals in the world because we have most of our dear and well known DJs such as Smoke from Renaissance soundsystem, Back to Basics, Private Ryan, Duchess and Giselle D Wassi One all aboard one truck. The Frenchmen trucks were definitely the ones to stick around not because of the DJs alone but also due to the fact that Machel was liming on the roof top of one of them while Bunji and Fay-ann were rocking another unlabeled Frenchmen truck. 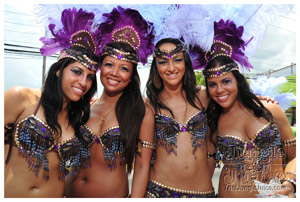 So in the blazing hot sun and the fiery antics of Carnival the band started off in Mona, passing Jamaica House, then made its way through Halfway Tree and went back to the Mas Camp. Even the massive Jamaican raindrops couldn't stop the revellers and everyone dried off after lunch and continued the bacchanal on the road. The Rain, we believe, acts like the paint or mud in J'ouvert - it brings out a different vibe, it adds to the vibe, it makes the vibe ... people get loose, they release everything, head pieces come off, belts come off ... oh lorsh ... It's Carnival ... is there any soca tune about wining in the rain??? 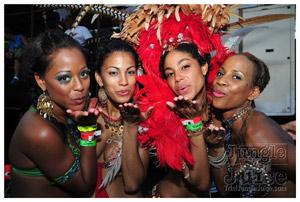 TJJ is definitely glad to report that Jamaica's Carnival is incident free and the occasional police presence ensured a safe carnival in the streets of Kingston. While jumping up waiters were combing through the crowd with snacks like sandwiches and cereal bars ensuring everyone is well fed and charged up to last until early evening. They even have waiters with bars on their backs ... oh yeah ... Rum and Cranberry Juice please! The march ended at Mas Camp with an after party which again provided delicious food and more drinks again.

In Jamaica you will definitely get your monies worth trust me.

Popots in Kingston without any fear, meh miss you bad.... see you next year!
....Scorn Juice contributed to this review ...