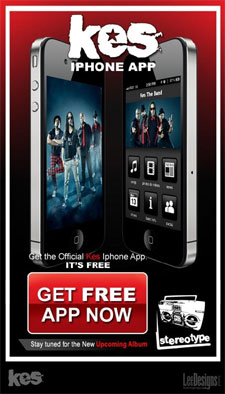 Kes (the band) this week announced the release of their newest single WEEKEND LOVE SONG off the unreleased album STEREOTYPE. The highly anticipated album will be released on June 1st 2011. It features the summer hit from 2010 LET ME KNOW, plus RED LIGHT, LOVING YOU (feat Tessanne Chin) and CASANOVA.

The album is a combination of POP/ Dance infused with soca inspired melodies and beats. The group worked very closely with Madmen Productions on all the music and they are extremely excited about this new album which will be their second complete album for 2011!

Last year the Kes pop/dance crossover song LET ME KNOW was picked up by Six Flags to be played throughout all their Amusement Parks in a New Music segment and also by American Airlines to play on their in-flight programs. On a recent trip to London KES was invited to perform three songs for a live segment on the BBC World channel.

The most recent achievement of the band includes winning one of the biggest competitions in the Caribbean for the song WOTLESS. KES is now the Groovy Monarch holder for 2011. Their WOTLESS Carnival album continues to sell out in stores locally and internationally.

The band continues to be innovative and find ways to keep their fans up to date with what they are doing and they are excited to release their very first ITUNES APP. Fans can go on Itunes and download the KES app that will feature all the latest news, tour dates, music and also connects fans to all their social networking sites. The link for this download is:

Coming soon is the KES App for the Android and Blackberry.

The band has just returned from some very successful tours, including sold out shows in Miami and NYC, Jamaica and Cayman Islands.

For more information you can find them on Facebook: KES THE BAND, www.reverbnation.com/KESTHEBAND