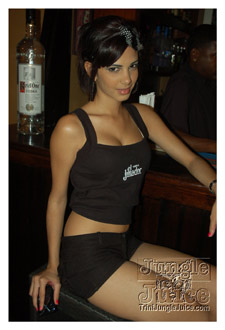 It's Thursday 5th May and I've been hearing the buzz about the return of Latin Thursdays at Coco Lounge. Honestly I've never been to a Latin Thursday but hey, first time for everything. Let me lace up my dancing shoes and the Jokey one hit the dance floor.

As I entered the venue...let the latino vibes begin. From the vibrant latin music, to the acrobatic display by the spanish bartenders, to even the sexy promotion girls, felt like i was in some sort of spanish heaven. And this was only outside. I could've only imagine what was going on on the inside of the venue.

Well we all kno Coco Lounge for being the laid-back venue where people more or less come to socialize and maybe take a little small dance here and there. Tonight was a whole different feel. If you were female and you weren't two stepping or spinning your hair like a spanish dancer, something was wrong with you. Or if you were male and wasn't seducing the ladies with your dance moves like a trini Antonio Banderez....something was wrong with you. As I spoke to one of the promoters, he explained that the turnout was good, but not as good as it was the week before because that same night there was a latin competition that very same night. Did i mention that people can get free latin classes?

For those who couldn't shake a tail feather, there were free magarita and tequila shots available, so one way or the other, you would've end up shaking something. Well as mentioned, due to circumstances the turn out that night was not the norm, but if that was the vibes from a little crowd, i want to be there for the big one.

Hats off to Chameleon Entertainment and Furillo for putting together a great vibe. Chameleon Entertainment will also be having their Wednesday events and Free Drinks Saturdays promotions. Also would like to give a special happy belated birthday to Joanne Sinanansingh. Eventhough I didn't recieve any cake or ice cream, we at TJJ say Happy Birthday!