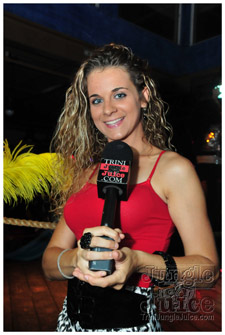 When someone told us that Margaritaville was a stone throw from the “Masquerade Fete” they weren’t joking. In less than 2 minutes drive, we were parked and at the entrance waiting on Cayman Bacchanal promoters to sort us out. What are the odds of your BlackBerry battery dying just after sending a “We’re at the door” BBM??!! In this case 100%. Thanks for sorting us out Cedric.

It’s about 11:45pm, and Trinbago’s Soca Diva Destra Garcia comes charging out to the stage area. Destra, who usually don’t like to perform without her band, wasted very little time getting the crowd into a frenzy as she fired away hit after hit after hit – “Obsessive Winers”, “Feel Like Wukkin” (mixed with some Burning Flames “Workey Workey”),“Proppa”, “Welcome Back”, “Fly”, “Bonnie & Clyde”, “Carnival” and only fitting “Bacchanal”. At one point during her performance, Destra had soca lovers running (and winning) in circles around the stage … it was vibes and all love for Garcia as Cayman flags waved high.

DJ Silver Fox kept the pace going following Destra’s wicked set, and at this point it turned into a pool party for a few smallies (we ent calling no names) who decided to “Cool It Down” by jumping into the people dem pool. Kes the Band was on the inside enjoying the vibes and showing their support, and their fans made it obvious as to where there were liming as they came in search for a photo or autograph opp. Kees then touched the mic free-stlying to “Wotless” as he got folks hyped for their “ONE – The Concert” event to take place on Friday 6th May at Swanky’s Mas Camp. 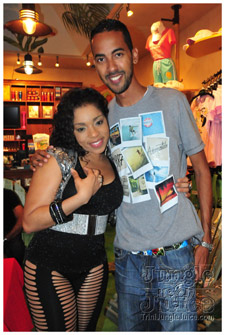 Later on we caught up with our girl Destra ‘Bam Bam’ backstage, and she explained to us what Carnival means to her and that no matter how big or small a Carnival is, there’s always one thing for sure – EVERYBODY ENJOYS SOCA MUSIC and there’s always TRINI JUNGLE JUICE and DESTRA!

Kudos to DMS, Partysurfers, Total Vision Entertainment and Margaritaville for putting together this event.

Our lime continued at Al La Kebab at the Marquee Plaza, where Destra continued the off-stage entertainment. Jokes fuh days!!

Welcome Back,
Chooks aka The Carnival Jumbie