By TJJ Admin
Published on 18-May-11
Two Labels have come together to bring to you one exciting reggae project. One goes by the name of JahLight Records hailing from Trinidad whilst the other comes all the way from Switzerland and is named Flow Productions. It is quite rare that we see studios coming together to put out a ... 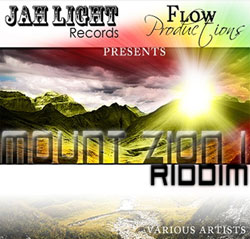 Two Labels have come together to bring to you one exciting reggae project. One goes by the name of JahLight Records hailing from Trinidad whilst the other comes all the way from Switzerland and is named Flow Productions. It is quite rare that we see studios coming together to put out a project collaboratively. With the Mount Zion I Riddim, this is wonderfully done. The production was done by Hugo Wolf of Flow Productions, recording and mixing done by Jahlight Records, Akeunde Pemberton and Kendel Arnold respectively. However, the mastering was done by veteran engineer, Nigel Julien of Dainjamentalz USA and executively produced by Akeunde Pemberton and Sherlon Jackson.

This reggae riddim can be described in more ways than one. It is beautiful, melodic and at the same time very assertive and powerful in its execution. It is Reggae music with a touch of RnB. Featured on the project are artists such as Zebulun, with the powerful title track for the album, ‘ Mount Zion I’, Multi Symptom, with the piercing, ‘Cherish Your Life’, veteran engineer and artist, Dainjamental from USA, with the scorcher, ‘Praise Jah’, alongside gospel artist, Koen Duncan, with the energetic ‘ Kingdom Call’, who has released couple high profile albums and has represented Trinidad worldwide winning several awards and performing internationally. Also making a fine contribution to the project are upcoming artists, Soul, with the encouraging, ‘Focus,’ Marq fx, with the poetic love song, ‘I’m There’, and Roxy Singh, with her very beautifully voiced, ‘What’s Going On’. The choice of artists for the project was well done helping to create just the right atmosphere that will leave a long lasting impression on the listener. Just by listening the instrumental track the listener is moved towards its touching and amazing grandeur. This riddim compilation is in a class of its own.The message in the music is real and ranges from words of God, love, hope, romance, determination and positivity. It takes the listener through a musical journey that is so exciting that it builds up a heightened anticipation. Overall, the Mount Zion I Riddim is definitely a must have for all fans of good reggae music as it remains true to the craft in every form. It is highly recommended and given its credit as it is more than reasonably due.

The reasoning behind the riddim name ,‘Mount Zion I’, is best described by JahLight Records manager, Akeunde Pemberton as he explains, ‘ it is to bring about the reality of the presence of the Kingdom of God and the need for humanity to turn from their evil ways and choose God before it is too late. Mount Zion is the city of David, the city of God; a place of peace, love, harmony. It’s a spiritual place of eternal joy, no sorrow, nor pain, where we can enjoy the company of God himself, forever. What an opportunity! We can all be there as God wishes for none to perish. However, we first must make the right choice by choosing Him. For in that choice rests where we would spend all eternity. With all urgency, in his track, Zebulun, instructs the listener to, ‘hurry up, because there is no time to waste!’ ,to bring about the reality that tomorrow is promised to no one. With that being being said, let’s all make the right choice.

Aimed and directed at the people, the world can look out for the Mount Zion I Riddim on airwaves worldwide and its release on digital stores, Itunes, Amazon, etc, on May 23rd 2011. In a time where we see the raging battle between good and evil, the JahLight Records team is bent on carrying the torch of righteousness through music. For with God they have the victory. ‘Keep Focus, continue to praise God and great will be your reward in Mount Zion’.