Jazz In The Gardens 2011 Review 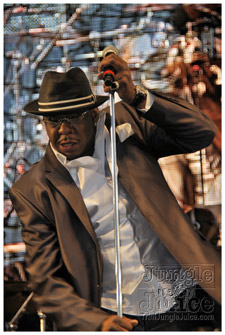 The 6th annual Jazz in the Gardens was held at the Sun Life Stadium in the beautiful city of Miami Gardens, Florida. This event was hosted by Michael Baisden a superb talk radio host. Lately he is producing and directing a documentary film titled “Do Women Know What the Want” which should be coming soon to theaters.

After last year’s 2010 Jazz in the Gardens experience, this year the experience has gotten even better with much more artistes in the lineup and they couldn’t have chosen a better venue to facilitate this event. The Sun Life Stadium is large enough to accommodate over 45,000 guests from all around the globe.  The stadium is situated in Miami Gardens near the major highways making it easy to travel through and from the Downtown area.

On Saturday March 19th, 2011, first on the line up was the beautiful Lalah Hathaway singing “Let Go” which she sang with her soul. Another favorite song Hathaway sang was “On Your Own”.

The legendary Al Jarreau holding seven Grammy Awards did an awesome performance with his hit song “So Good”.  Head of State Bobby Brown, Johnny Gill and Ralph Tresvant looked amazing and their performance was fantastic, this group brought back some serious memories of the New Edition days. They performed oldies like my “My Prerogative” and “Cool It Now”.

Charlie Wilson rocked the audience with “There Goes My Baby” as they stood up and sang along.

Lastly, the most anticipated act, Lauren Hill performance was delayed by about an hour because of sound issues.  And when Lauren finally came on, many Jazz patrons were disappointed in her performance and left before she finished. 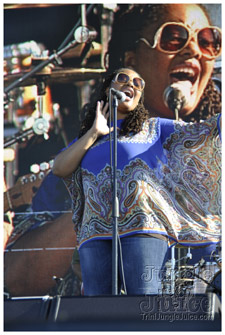 On Sunday March 20th, 2011 Branford Marsalis gave an extraordinary performance playing the saxophone.  Followed by Musiq Soulchild who performed songs from his ‘I Just want to Sing’ album such as “Love” and “Just Friends”. En Vogue’s Terry Ellis, Dawn Robinson and Cindy Herron Braggs came out all looking as hot as ever as they performed “Free Your Mind”. The Isley Brothers Ronald and Earnest Isley sang classics like “That Lady” and “It’s Your Thing”.

Gladys Knight gave a memorable performance with her hit songs from her ‘Before Me’ album, and the song “Best Thing That Happened to Me”. Gladys performance most certainly expressed passion for Jazz and Soul. DJ Irie did a tremendous job with the music on both days, really getting the party started.

There were numerous food tents to satisfy your taste buds such as Cajun, Jamaican, Bahamian, Greek, Chinese, Italian, and Indian to name a few cuisines from all over the spectrum. And I can’t forget to mention the turkey legs, funnel cakes and ices.

Overall the 6th annual Jazz in the Gardens Music Festival was a great success, with spectacular performances.