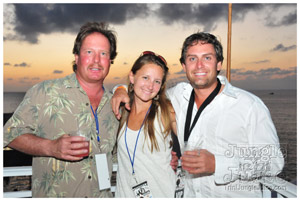 It's Friday night before the Cayman Batabano Adult Parade 2011, and on today's Carnival party lineup was The Wailers at the Waterfront. Now this event started in the early evening at 5PM, so if one was still feeling a little frisky and didn't want to go home, there was a later Carnival event taking place.

CROWD:
Earlier on we didn't know what to expect as the venue was pretty much empty, but when we returned from taking down a couple rounds of "alcholic beverages" as our good friend Destra calls it, along with some roti at Singh's Roti Shop, the Royal Watler Terminal was filled with sexy people who came out to experience the soulfulrhythms of The Wailers. And it was nice to see the band members before the concert mingling in the crowd greeting old and new friends.  The people of the Cayman are very embracing to other cultures, so we felt welcomed to be there partying and celebrating Batabano 2k11. Our TJJ TV crew had a lot of fun with folks in our search to see who knew the words for "Three Little Birds" before the concert started.

VENUE/ACCESSIBILITY:
The venue was breathtaking overlooking the ocean, you could have seen the sunset and the starry night while enjoying the live entertainment. And for $80 CI, one could have enjoyed the concert from upstairs in the VIP section. The promoters surely did and excellent job with the choice of venue. 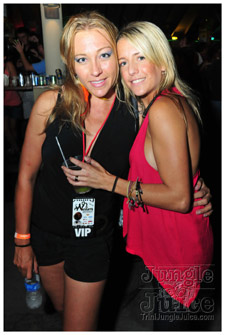 VIBES:
Together with Robert 'Nesta' Marley, The Wailers have sold in excess of 250 million albums worldwide. And with over twenty chart hits, including seven Top 10 entries, there was no doubt in our minds that the vibes wasn't going to be on point. Personally, I really enjoyed when they performed "A Step for Mankind" ... the energy can't be described.  The present crew is touring globally and is keeping reggae music alive today.

We exited after catching up with reggae artist Duane Stephenson backstage, but before The Wailers wrapped up their set. But the crowd was still easy skanking and swaying to their hits.  So although we were a bit skeptical about having a reggae and a soca concert on the same night (on a Carnival weekend too), we must admit that it actually worked out pretty well, giving people a choice to do one or BOTH (as in our case) events!

Right, we get a little Reggae in we system.... time to get on "Wotless" at ONE "The Concert"!!