Patrons caught in a daze by the May Daze World Tour 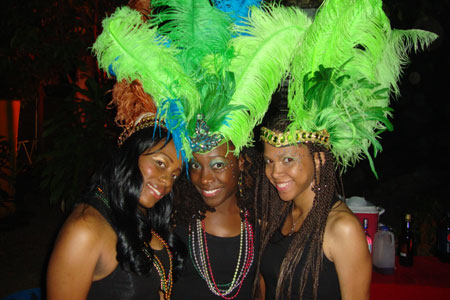 The third leg of the tour is heading to Kingston, Jamaica for 90’s Rock. This will feature music and style of the nineties.

Kingston, Jamaica, May 19, 2011: With two weeks passed and two destinations covered (Netherlands – Amsterdam and Brazil – Rio De Janerio), Appleton May daze – The World Tour is now in full swing, mid way through the event series. If the vibe and energy of the last weeks are any indication of the prospects of what’s to come, then patrons are in for quite a treat.

The second stop for the tour was Rio de Janeiro, Brazil and the theme was centered around a very popular feature of Brazilian culture; ladies in short shorts and Bikini tops. With ladies being granted charge free entry before 11pm, it was no surprise that by 12am the event was in full swing with a sea of beautiful ladies most of whom stuck to the theme and added their own twist to the ever popular summer dress style.

The venue was filled with the May Daze Brazilian beauties all of whom were fitted with Brazilian type carnival costumes which found them being drafted for picture after picture with the patrons.

For many the night started when Dj Narity took control of the turn tables and almost strategically made selections which got the patrons pumped and energized with each subsequent selection. Zj Chrome and Zj Ice had a tag team session which was met with consistent cheering by the patrons in attendance. This ‘joining of forces’ between two of Jamaica’s popular and favourite Disc Jockeys was a mere example of the vibrant/free styled nature of Appleton May Daze and its moments like these which make the event series always memorable. Arif Cooper and Scientist closed the night and showed why they are amongst the well respected selecting duos out of Jamaica.

May 20th will see the third leg of the tour heading to Kingston, Jamaica for 90’s Rock. This will feature music and style of the nineties, a period of music culture which ardent fans have held on as being the most influential with some of the post popular sounds of our generation. Almost at the flicker of a thought names like Shabba Ranks, Supar Cat, Biggy Smalls, Sleng Teng Riddim, L.A Gear readily comes to mind.

Good Company have conceptualized an event for the series which they believe merely build on the already beloved nineties vibe. This week will see selections from Resident Dj – Zj Ice, Phil Dwag, Kurt Riley and Zj Solar Dre. With a musical lineup which features disc jockeys that have proved their skill in the area of 90’s music over and over, it is clear that the music will be speaking to the minds and feet of the patrons that come out for this one.

Jamaica’s favourite rum - Appleton will continue to pour, more so this week with their signature Appleton Mug Madness which will allow patrons to have unlimited Appleton mixes all night for a small cost effective price. To top off the night’s offering will be the AMD retro surprise, which will feature a memorable element of the 90’s which the promoters will be incorporating into the night’s happenings.