By Keiron S.
Published on 22-May-11
“Everywhere everywhere, Everywhere I go… Everywhere that I’ve been, The only thing I see is, is Beautiful People!”  And that’s what you got at Beach House plus more!!!
>> View Beach House Mayfair Gallery 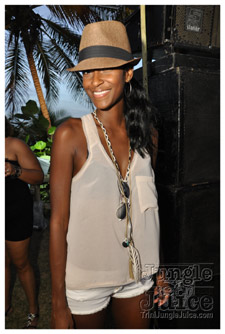 “Everywhere everywhere, Everywhere I go… Everywhere that I’ve been, The only thing I see is, is Beautiful People!”  And that’s what you got at Beach House plus more!!!

I’m pretty certain that Beach House is the inspiration for that “Beautiful People” techno song by Chris Brown!  And after attending Beach House on Carnival Thursday it was time for Beach House’s second edition for 2011… Beach House Mayfair!

While I still had the bitter after taste from that frustrating long line to get food at a single location in Beach House Carnival 2011, I eagerly awaited to see how the logistics were going to be for Beach House Mayfair as this fete had now also evolved into an All Inclusive affair.  So the TJJ family decided to make the Sunday road trip to Blanchisseuse, with the traditional pit stop at Maracus Beach for some bake & shark, to enjoy some Beach in a House!

Same logistics so far as last year…Customer parking at Blanchisseuse High School, a shuttle service to the event and free water and energy drinks to enjoy along the ride; easy entry and security checks at the gate; but what’s this, all of the food at a single location again!  But I guess that this would not be a recipe for destruction as there were significantly less people at this event due to the present gas strike at National Petroleum Company in Trinidad which caused people to change their mind from using their car to make the long trip to the north coast resort. 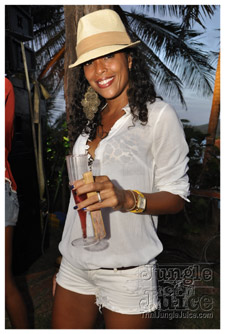 The Mayfair theme was again evident stalls punctuating the entire grounds with free popcorn, cotton candy and snow cone.  This year though there was no hoopla stall, so no chance to win free bottle of premium alcohol.  But in the end the highlight was the Bmobile Hammer Strong Carnival Theme Park Game which separated the strong men from the pretty party boys with every sound of the bell!  And yuh know that d’ local Juice tried to get his strong arm going, but after that horrific swing the bell remained silent!

Now it was time to get your drink on with multiple 50 foot bars and separate wine bars you simply could not go wrong.  The food was not bad either with a mixture of Italian, Creole and Indian dishes.  And this time an extra effort was made to make sure that food does not ever run out because by the end of the party there was still so much food left that the caterers were begging people to take a doggie bag with them. 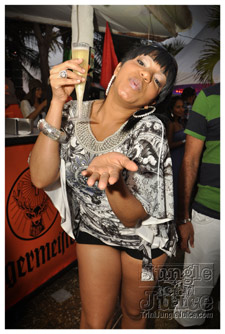 The dance had some good vibes as DJs Joy Juice and Tweeze kept us musically grounded with Soca, R&B and Hip Hop.  But it was the surprise of the night DJ Private Ryan who teleported us back to our own high school Mayfair with classics form the 80s remixed with a modern techno twist!

In the end with a good theme, beautiful crowd and good service Beach House Mayfair was the event to go to on a Sunday evening.