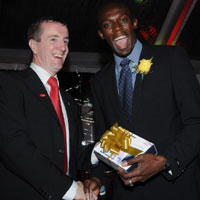 The Digicel hosted Olympians' Homecoming Gala Dinner got off to a good start and the mood was kept mellow by the Wray and Nephew Bar accompanied by the lovely Jessica Yap on violin.

Monday, October 13- Kingston, Jamaica: Digicel on Friday October 10 hosted what was an exceptional soiree for the Beijing 2008 Olympians that saw some of the Jamaica's most influential and noted personalities coming out to pay tribute to Jamaica's Olympic heroes at Vale Royal. The gala was a culmination of a week of activities that saw the Olympians being honoured with national recognition and numerous other awards.

The Digicel hosted Olympians' Homecoming Gala Dinner got off to a good start and the mood was kept mellow by the Wray and Nephew Bar accompanied by the lovely Jessica Yap on violin. There were also popular renditions by the Gumption Band who would later back Digicel 2008 Rising Star Cameal Davis and reggae Icon Freddy McGregor as they gave tributes to the Olympic Heroes.

The food was exquisite with caterers Ciao Bella going all out to present a golden treat. The over six hundred patrons feasted on succulent Beef Tenderloin, Mahi Mahi Fish seasoned to perfection and Pumpkin Bisque. The meal was topped off with Dessert Medallions, Puff Pastry and decadent Chocolate Truffles. 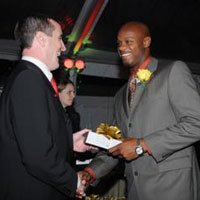 The Olympians' Homecoming Gala Dinner saw the athletes getting more recognition with Triple Gold Medallist and world record holder Usain Bolt receiving a large painting from renowned Jamaican artist Richard Hall. All the athletes including the Special Olympians and Para-Olympians received personalised engraved high end phones such as the Samsung U600, the Samsung Tocco and the Samsung G600. There was also a silent auction towards the Jamaica Amateur Athletic Association with the target of 1.6 million dollars being far exceeded.

Successful bidders won prizes such as weekends at Sandals, Air Jamaica flights and trips to New Jersey. The top prize for the auction was a trip for two to the exquisite 5 Star Mandarin Oriental Hotel in Miami, Florida plus air fare and 2000 US Dollars spending money; a prize donated by Digicel Chairman Denis O'Brien.

All guests who attended the Digicel hosted Olympians' Homecoming Gala Dinner got a framed 11/17 replica of a collage of pictures featuring Usain Bolt in full flight signed by Usain Bolt. The nights events did not end at Vale Royal; everyone who attended was invited to the after party at Red Bones where international reggae band Rootz Underground and reggae star Beres Hammond further serenaded the athletes and guests.

Digicel is proud to have hosted such an affair and by the reviews chronicled it was a night to remember and a fitting end to Jamaica's Olympic Homecoming Celebrations.