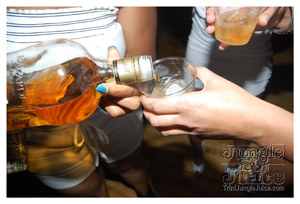 There is no doubt why the Annual Wear White has been such a huge success. For the 12th straight year, Promoter Jillian and famed ATL DJ Tony Tempo, have combined great management with great music. This year featured an All Star line up, including Soca Monarch Runner up Neil 'Iwer' George and true new comer to the scene... Devyn (who by the way blew the crowed away). Many of the soca lovers front and centre to the stage, couldn't believe why this eleven year old was up at 4am in the morning performing on stage. Or could they? Well, Machel Montano did it back in the 80's and look at him now... He's making paper!!! Devyn... great job!

As for Iwer, his performance can speak for itself. With his 2011 hit song 'Come To Meh' Iwer became one with the crowd by climbing off stage, and was the focal point for approximately 10mins. As he said 'Come to Mah'... the 'dressed in white' crowd followed him to the bar and back, to the DJ booth and back, to the stage and back, and I'm sure wherever else he wanted. Iwer's performance gave the 12th Annual Wear White "Come to Meh" Edition, just the edge it needed to be considered one of the best Carnival events for Atlanta Carnival 2011.

CROWD:
Bold, beautiful, classy and certainly ready for a great time. The crowd almost filled a roller rink... can you imagine? Next year you won't have to if you attend! 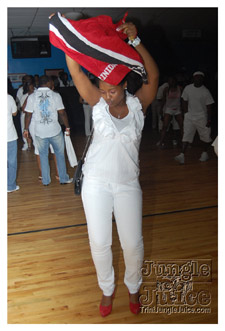 VENUE/ACCESSIBILITY:
Location was great. Close to the I-20. The ambiance could certainly improve but with a Soca crowd and everyone dressed in white, not too many folks could complain. The temperature was great... just until it got packed. Then Iwer cooled us down (yes including me) with his 2005 hit 'Water' and literally sprayed the crowd with bottles of water. Thanks Iwer! The place was clean and parking was very accessible.

VIBES:
The vibes started off a bit slow.... but that was prior to Iwer's performance. Then DJ Touches, DJ Jaspa, Skin Tight and DJ Tony Tempo worked the crowd into a Soca frenzy until the we hours of the morning.

FOOD/DRINKS:
The variety and prices of this cash bar was great and the location of the bar was fantastic. Yet something was lacking... hmmmmm.... I think some more female bartenders.... I think. The bar counter could have been a bit longer to service the growing crowd.

SERVICE:
Variety in servers was lacking but the service was good. 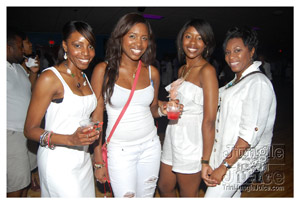 COST/VALUE FOR MONEY:
$20 in Advance, more at the door.... but considering the large crowd on hand, I believe patrons got their monies worth.

Houston Posse... WE COMING! I must also say thanks to the TJJ temps that assisted us this weekend... Collin and Troy and his partner Jesse....Whoa Whoa Whoa....We even thought we saw Santana in de party! Right Kerri and Monica? Gabbi and mummy.... we missed you guys at the end. But I took a half wine for you!

Jillian, thanks for looking out for TJJ. We had a great time. We will be ready for the 13th Annual!!!

Joy Juice... Out and About